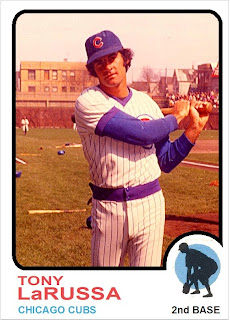 ~Tony LaRussa 1944– (Cubs 1973)
On April 6, 1973, the Cubs won the opener 3-2 over the Expos in the bottom of the ninth because the best relief pitcher in baseball, Mike Marshall, walked in two runs. The winning run was scored by Tony LaRussa in his only game as a Cub. He came in as a pinch runner for Ron Santo. Of course after his unexceptional playing career (he only had a total of 203 plate appearances in parts of six big league seasons), LaRussa became a Hall of Fame manager, winning the World Series with both the Oakland A’s and St. Louis Cardinals. (Photo: Topps 1974 Baseball Card)

~Orator Shafer 1851–1922 (White Stockings 1879)
His real first name was George, but he was pegged with the nickname Orator because he was a smooth and gifted speaker, and that’s what everyone called him. Orator played 13 seasons in the big leagues, including the 1879 season for the Cubs (then known as the White Stockings). He was their starting right fielder and batted over .300. Shafer is considered one of the best fielding right fielders of the 19th century. He also played for Hartford, New York, Philadelphia, Louisville, Indianapolis, Cleveland, Buffalo, and St. Louis.

~Bobby Scales 1977– (Cubs 2009-2010)
Everyone was rooting for Bobby Scales when he came up to the Cubs in 2009. He was a 31-year-old rookie who had really paid his dues in the minors (14 seasons). He briefly played well in a part-time role in the big leagues, filling in at third base, second base, left and right field. He also had a few dramatic clutch hits that made the fans rally around him. Unfortunately for Bobby, he had maximized his potential. He made his last appearance as a big league player on the final day of the 2010 season. He played a few more seasons after that in Japan.

~Lary Sorensen 1955– (Cubs 1985)
Lary (spelled with one ‘R’) pitched for seven teams in an eleven-season big league career including the Cubs in 1985. He was an All-Star with Milwaukee when he won 18 games for them in the 1978 season, but by the time he came to Chicago he wasn’t the same pitcher. With the Cubs, Sorenson was converted into a reliever, pitching in 46 games. He was 3-7 with a 4.26 ERA and was released after the year.

~Mike Walker 1966– (Cubs 1995)
Walker was born in Chicago and eventually played for the Cubs as part of his major league journey. After washing out as a starter with the Indians, he was a reliever for the Cubs. In 42 games, he won one game, saved another, and posted a respectable 3.22 ERA. He later also pitched for Detroit.

~Bob Kelly 1927– (Cubs 1951-1953)
Kelly was a right-handed pitcher who came up with the Cubs and pitched as a swing-starter for two seasons, and part of a third. The Cubs traded him to the Reds in the middle of the 1953 season for Bubba Church. Kelly couldn’t have been thrilled with the trade. He was sent to the minors shortly after arriving in Cincinnati and didn’t return to the big leagues until five years later.

~Bob Rhoads 1879–1967 (Orphans 1902)
Like every other baseball player with the last name of Rhoads, Bob was nicknamed Dusty. He was a 22-year-old rookie with the Cubs (then known as the Orphans) and started 16 games for them in 1902. That team had six players who would eventually go on to win the World Series for the Cubs (Tinker, Evers, Chance, Slagle, Kling, and Lundgren). The Cubs traded Dusty to the Cardinals the following April and he pitched eight more seasons in the big leagues. His best years were with Cleveland, where he became a 20-game winner.

~Jim Gardner 1874–1905 (Orphans 1902)
The 28-year-old was only given three starts. He completed two of them. Those were the last two appearances of his big league career. He also played in the field earlier in his career (2B, 3B, OF) for Pittsburgh. Gardner’s last game in Chicago was the same week future mayor Richard J. Daley was born.

~Ossie France 1858–1947 (Colts 1890)
If you want to travel back in time to watch France pitch in the big leagues, set the wayback machine to July 14, 1890, and go to Brooklyn. He pitched two innings for the Cubs (then known as the Colts) and gave up three runs in a 10-3 loss. It was his only appearance in the big leagues. And yes, this only Cub named France pitched his only game on Bastille Day. 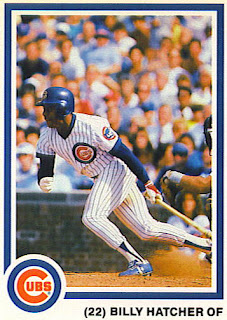 ~Billy Hatcher 1960– (Cubs 1984-1985)
Hatcher was a bright young prospect in the Cubs system that came up at a time the Cubs outfield was crowded with veterans. He was traded to Houston, and it didn’t take long for the Cubs to realize they made a mistake. Billy Hatcher turned out to be a postseason juggernaut after he left the Cubs. He led the 1986 Astros to the NLCS and hit a dramatic homer in the bottom of the 14th inning of Game 6 to tie the game against the Mets. But he will always be remembered for his performance in the 1990 World Series. Hatcher hit an incredible .750 for the series (9 for 15) and helped lead the underdog Reds to a sweep of the heavily favored Oakland A’s.