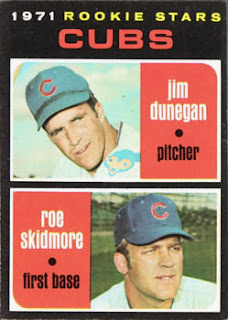 ~Roe Skidmore 1945– (Cubs 1970)
He played in exactly one game for the Cubs in 1970, and his lifetime batting average is 1.000. Skidmore hit a Jerry Reuss pitch over third baseman Joe Torre’s head for a clean single against the Cardinals. The New York Times wrote a piece in 1999 about him and other players who only made it into one game. At that time, the ball he hit was on his mantle. Skidmore lives in Decatur.

~Charlie Deal 1891–1979 (Cubs 1916-1921)
Charlie was the starting third baseman for the Cubs for five seasons, including their pennant-winning season of 1918. He wasn’t a great hitter (lifetime average .257) and he didn’t have a lot of power (only 11 career homers), but he was a gamer who knew how to handle the bat. One year he led the league in sacrifices. Charlie also played an important role in the shortest game in Cubs history (played on September 21, 1919). With Grover Cleveland on the mound, Charlie knocked in two runs in the 6th with a double, and another in the 8th with a ground out, and Alexander did the rest. The game was finished in less than one hour (58 minutes). That record has a very good chance of never being broken.

~Kettle Wirts 1897–1968 (Cubs 1922)
Wirts joined the team in 1922. The Cubs had three catchers on the roster: starter Bob O’Farrell and two young backups with awesome nicknames, Gabby Hartnett and Kettle Wirts. Wirts and Hartnett both caught 27 games that season for the Cubs, but their careers would go in very different directions. Hartnett would develop into such a force that the Cubs would find O’Farrell expendable. (They traded him to the St. Louis Cardinals, and he led them to their first World Series title in 1926.) Wirts, on the other hand, drifted off into obscurity. He played his last major league game in 1924. In parts of four big league seasons, Elwood Vernon Wirts managed to get only 86 at-bats. Although he accumulated a total of only three extra base hits (two doubles and one home run) in those at-bats, he also acquired a great nickname. Unfortunately, the origin of that nickname has disappeared into the ether like Kettle himself. Wirts died in Sacramento, California in 1968 at the age of 71.