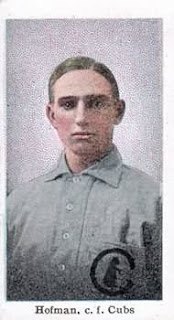 ~Solly Hofman 1882–1956 (Cubs 1904-1912, 1916)
His nickname was Circus Solly, and he played for the Cubs during their most dominant era, and was a key member of four World Series teams. At first he was a utility man, but by the time his Cubs tenure was through, he was their full-time center fielder. Circus Solly was only a lifetime .269 hitter, but in the World Series he took his game up a notch. He hit .298 in 57 World Series at-bats, and made some spectacular plays in the outfield. His most famous moment in a Cubs uniform, however, occurred during the infamous Merkle Boner game in 1908. When that game supposedly ended, the ball was in Circus Solly’s hands. Johnny Evers called for it, but when Hofman threw it, it sailed over Evers’ head. Evers did finally get his hands on the ball, and touched second base. That resulted in the force-out that cost the Giants the pennant. Circus Solly played for the Cubs from 1904-1912, and then returned to finish his career with them in their first season at what is now known as Wrigley Field in 1916.

~Richie Barker 1972– (Cubs 1999)
He was a 37th round draft choice of the Cubs who eventually made it all the way up to the big leagues for a cup of coffee in 1999. The right-hander appeared in five games early in that season and posted an ERA of 7.20 (probably in honor of the radio home of the Cubs at the time, 720 AM, WGN).

~Mark Baldwin 1863–1929 (White Stockings 1887-1888)
Baldwin won 31 games over two seasons with the Cubs (then known as the White Stockings), but really came into his own after leaving the team. He started more than 50 games a season over the next four years, leading the league in innings pitched. One year he threw over 500 innings, struck out 368 men, walked 274, and threw 83 wild pitches. Those are the kind of numbers the game will never see again. Baldwin’s nickname was Fido.

~Arismendy Alcantara 1991– (Cubs 2014-2015)
Alcantara was the first of the new wave of Cubs prospects to make it up to the big leagues in the summer of 2014. He showed flashes of promise in his rookie season, but finished the year hitting only .205. Before the end of May in 2015, he was sent down to the minors to rediscover his hitting stroke. He was traded in 2016.