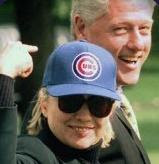 ~Hillary Rodham Clinton 1947– (Cubs fan 1947-Present)
She grew up in Park Ridge, Illinois, an unabashed Cubs fan. Even though she later claimed to have been a Yankees fan, there is documentary evidence to prove her Cubs love. In 1993, when she was the First Lady, she accepted induction into the Emil Verban society, the Washington-based Cubs Fan Club. Bruce Ladd, who is the founder of the Emil Verban Society, recently revealed the content of her letter accepting induction. If this isn’t a Cubs fan, there is no such thing. She wrote:

“I am pleased to accept your generous offer of membership into the Emil Verban Memorial Society. In accepting I must say that the Tribune Co.’s decision to let Messrs. Dawson and Maddux go does not increase my optimism for 1993. This could be a truly grievous example of false economy, unless, of course, the Tribune uses the savings to acquire better editorial writers. I have been following the Cubs for over 35 years and have developed a set of expectations that will probably be met. However, hope springs eternal.”

The following year Mrs. Clinton was even more obvious about her loyalties; she appeared at Wrigley Field on opening day 1994 to throw out the first pitch. She later sat in the booth with Harry Caray and sang “Take Me Out To The Ballgame” with him. At one point, Harry grabbed her and gave her a big kiss. Only a Cubs fan could have survived that.

~Steve Ontiveros 1961– (Cubs 1977-1980)
The former minor league player of the year was acquired from the Giants in the Bill Madlock trade. He may not have been a good replacement for Madlock at third base, but Steve Ontiveros wasn’t terrible. He came within one hit of batting .300 in 1977. He played parts of three other seasons with the Cubs and didn’t do much before being released in the middle of the 1980 season. He went to Japan after the Cubs let him go, and starred there for another five seasons.

~Otto Vogel 1899–1969 (Cubs 1923-1924)
Otto was a star in college at the University of Illinois, and was known as the Babe Ruth of the Big Ten. (He also starred in football.) The Cubs sent him right to the big leagues, where he didn’t quite live up to the Babe Ruth name. He fell just 713 homers short of Ruth. His one homer was hit in July of 1923. After his playing career he became the head coach at the University of Iowa. He held that job for 39 years.

~Tommy Griffith 1889–1967 (Cubs 1925)
Griffith played 13 seasons in the big leagues (mostly for Boston, Cincinnati, and Brooklyn), the last of which was with the Cubs. The right fielder hit .285. When the season ended, Griffith hung up his spikes for good. The highlight of his career was probably playing for Brooklyn in the 1920 World Series. The Indians won the series that year, but Tommy batted third in the lineup and started in right field for Brooklyn.

~Harry Chapman 1885–1918 (Cubs 1912)
His debut game in the big leagues on October 6, 1912, was also the last game of the season for the Cubs. The catcher caught Larry Cheney, went 1 for 4 with an RBI and a stolen base, and the Cubs won the game 4-3 over St. Louis at West Side Grounds. It was his only game in a Cubs uniform. Harry later caught for Cincinnati and St. Louis. He died in 1918 while serving in the U.S. Army (of influenza-induced pneumonia).

~Andy Sommers 1865–1908 (White Stockings 1889)
Not to be confused with the lead guitarist of The Police, this Andy Sommers was a catcher/outfielder for the first half of the 1889 season with the Cubs (then known as the White Stockings). He got into twelve games and hit .222 before being released in July. Sommers also played for New York, Boston, Indy, and Cleveland.