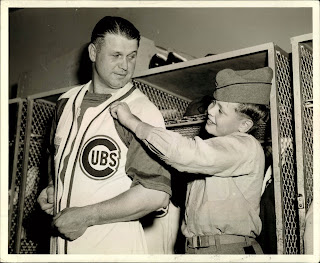 ~Jimmie Foxx 1907 (Cubs 1942, 1944)
He was nicknamed the Beast because of his imposing physical presence. Foxx is one of the all-time greatest sluggers: a two time World Series champ, a three time MVP, winner of two batting titles. Foxx led the league in home runs four times, RBI three times (despite playing at the same time as Ruth and Gehrig), and hit 534 career home runs. Unfortunately for Cubs fans, only three of those home runs came with the Cubs, who picked him up one year after his last good season. He hit .190 with the team in 225 at-bats, and was released in 1944. He later managed one of the women’s teams during the war, and was the inspiration for the character played by Tom Hanks in “A League of Their Own.”

~Frank DiPino 1956 (Cubs 1986-1988)
The Cubs got DiPino in a trade with the Astros for aging speedster Davey Lopes. Ironically, DiPino looked even older. The prematurely gray reliever was called upon quite often during his time with the Cub. In 2 1/2 years he appeared in over 150 games for Chicago. He won 7 games, saved 10, and gave up 20 homers. A little known tidbit about Frank: He was the loser of the game played on the day Geraldo opened Al Capone’s vault.

~Harry Walker 1916 (Cubs 1949)
Harry was an all-star with the Cardinals before the war, and came to the Cubs a few years after the war ended. The Cubs got him in a trade for their former crowd favorite Bill Nicholson. Harry didn’t work out in Chicago. He only hit one homer and was hitting .264 as a corner outfielder for the Cubs when they traded him to the Reds for Frank Baumholtz and Hank Sauer. The former anchored Wrigley’s centerfield for years, and the latter became an MVP for the Cubs. Walker’s brother Dixie also played in the big leagues, and is most remembered as the player who most vehemently protested Jackie Robinson’s promotion to the Dodgers in 1947.

~Eli Whiteside 1979 (Cubs 2014)
The 34-year-old catcher appeared in only eight games for the Cubs. He had previously caught for the Giants and Orioles. After the season, he signed with the Braves. 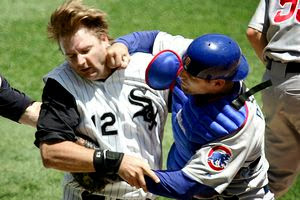 ~Michael Barrett 1976 (Cubs 2004-2007)
Barrett was the starting catcher for the Cubs for several seasons. He hit the ball well, clubbing 16 homers and knocking in more than 60 runs every year in Chicago, but he also had his difficulties defensively. Barrett is remembered most for three events. 1) He suffered a gruesome “twisted testicles” injury that made every man in Chicago grimace. 2) He and Carlos Zambrano got into a fistfight in the dugout/clubhouse, leading to a Barrett black eye. And most importantly 3) He earned the applause and respect of everyone in baseball when he punched taunting White Sox catcher A.J. Pierzynski in the face.