~Mordecai Brown 1876–1948 (Cubs 1904-1912, 1916)
He was born in 1876, the same year the Cubs played their very first season in the National League. Three Finger probably owns one of the best nicknames in baseball history, and he earned it the hard way. As a seven-year-old boy, Mordecai caught his right hand in a corn grinder on his uncle’s farm. They needed to amputate almost the entire index finger, and the middle finger was mangled and left crooked. His little finger was also stubbed. When he learned to add spin to the ball by releasing it off his stub, he became a pitcher. When he started to have success, the newspapers called him Three Finger for obvious reasons. Three Finger is one of the greatest pitchers to ever wear a Cubs uniform. In ten years with the Cubs, he won 188 games, including 29 games in 1908 and 27 games in 1909. He led the league in wins, ERA, shutouts, and even saves (in four different years). He also pitched in four World Series for the Cubs. In seven World Series starts, he won five (five complete games), and three of those were shutouts. That, sadly, is probably a Cubs record that will never be broken. Three Finger was inducted into the Hall of Fame in 1949: one year after his death. His 1.80 career Cubs ERA and 48 shutouts are both the best in franchise history. This is a very rare film of Mordecai in action.

~Lance Dickson 1969– (Cubs 1990)
The Cubs picked Lance one pick before Rondell White in the first round of the draft in 1990. Dickson tore up the minor leagues, and made his big league debut in September of that year. It didn’t go well. Lance was rocked hard in his three September starts — which turned out to be the only three appearances of his big league career. The following year he suffered a stress fracture, and then he hurt his arm. By 1995, Dickson was out of baseball.

~Dave Veres 1966– (Cubs 2003)
Veres was an excellent reliever with the Cardinals. He saved 60 games over a two-year period. But by the time he came to the Cubs, he was clearly a shell of his former self. In the seventh inning of Game 7 of the NLCS against the Marlins, the Cubs were only down by a run. Matt Clement was available in the pen, but Dusty Baker opted to bring in Veres, despite the fact that Veres had been routinely rocked the last few months of the season. Veres immediately gave up a two-run double, and the Marlins broke open the game. It was the last appearance of his big league career.

~Daniel Descalso 1986– (Cubs 2019)
With Addison Russell suspended, and Javier Baez permanently moved to shortstop, the veteran infielder began the 2019 season as the Cubs starting second baseman. He was even listed on the All-Star ballot. It went downhill pretty quickly from there. By the end of the season, Descalso was rarely even being used as a defensive replacement or pinch hitter. He hit .173 for the year, among the worst seasons in all of baseball. On the other hand, the Cubs credited him with remaining positive, and providing veteran leadership in the clubhouse.

~Mike Perez 1964– (Cubs 1995-1996)
Perez was another reliever who pitched very well for the Cardinals. He won 18 games and saved 19 in his three seasons with St. Louis before joining the Cubs. It didn’t go quite as well in Chicago. He won two and saved three and was released. The Puerto-Rican right-hander got one more cup of coffee with Royals before calling it a career.

~Vic Roznovsky 1938– (Cubs 1964-1965)
Vic was a backup catcher for the Cubs for two seasons on two very bad teams. Just as they were showing signs of turning the corner, Vic was traded to the Orioles. Of course, Roznovsky wasn’t complaining. His first year with Baltimore, they won the World Series. Among his teammates on that team: former Cub Moe Drabowsky and future Cub Davey Johnson.

~Brock Davis 1943– (Cubs 1970-1971)
Brock was a talented and speedy player who got the bulk of playing time for the 1971 Cubs in center field. Unfortunately for him, he never quite figured out how to translate his speed onto the basepaths, and he had no power at all. He stole zero bases and hit zero homers, and after the season the Cubs traded for Rick Monday to replace him. Davis was sent to Milwaukee in the package that brought Jose Cardenal to the Cubs.

~Cory Mazzoni 1989– (Cubs 2018)
Cory got a cup of coffee with the Cubs in 2018 and pitched very well in limited action. In eight appearances he only gave up one run. After the season, he was allowed to become a free agent. 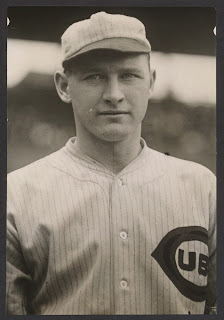 ~Bob O’Farrell 1896–1988 (Cubs 1915-1925)
Bob was the starting catcher for the Cubs in the years before Gabby Hartnett took over the job. He was considered an outstanding defensive catcher, renowned for his toughness. One year O’Farrell suffered a skull fracture after wearing the wrong equipment and getting a foul ball to the face. By 1925 the Cubs thought his best days were behind him and they traded him to the Cardinals. All he did with St. Louis was win the MVP award and help lead them to their first World Series championship. The following year he was the player/manager and led the Cardinals to a second place finish. O’Farrell ended up playing 21 years in the big leagues.