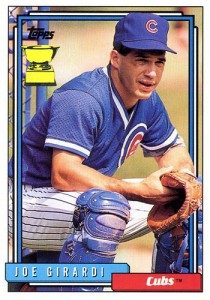 ~Joe Girardi 1964– (1989-1992, 2000-2002)
Girardi was a rookie catcher on the Cubs team that surprised everyone and won their division in 1989. Even in his younger days he was seen as a calm force on the team. The Northwestern Grad (and Peoria native) seemed to really enjoy playing in his home state. But the Cubs left him unprotected in the 1993 expansion draft, and Joe was drafted by the Rockies. He didn’t really make a name for himself, however, until he joined the Yankees in 1996. Girardi was the starting catcher of the team that won the World Series in 1996 and in 1998, and backed up Jorge Posada for the 1999 World Series champs. The following year Joe returned to the Cubs and made his first All-Star team. All of the players looked up to him, and he became the spokesperson for a team that featured the likes of Sammy Sosa. When Darryl Kile of the Cardinals died tragically in 2002 (the night before a Cubs-Cards game), it was Joe who stepped to the microphone to pay tribute to Kile in front of the Wrigley Field crowd. Girardi has since become a big league manager and won another World Series title in that role with the Yankees in 2009. (Photo: 1990 Topps Baseball Card)

~Carlos Marmol 1982– (Cubs 2006-2013)
For several years in the mid-to-late ‘00s, Marmol was one of the most feared relief pitchers in the game. His slider was so nasty he made batters look absolutely foolish. It was largely on Carlos’ arm that the Cubs dashed into the playoffs in 2007 and 2008, and it clearly wasn’t his fault they were swept. Still, as nasty as Carlos could be, he also had a tendency to be very wild. It was not uncommon at all for Marmol to walk the bases loaded before striking out the side. He saved over 100 games in a Cubs uniform, but it was a wild and bumpy ride. The Cubs finally had enough of the roller coaster in 2013, and shipped him off to the Dodgers. He finished his Cubs career with the third most saves in Cubs history, behind only Hall of Famers Lee Smith and Bruce Sutter.

~Brad Wieck 1991 (Cubs 2019)
The Cubs essentially acquired Brad in a trouble-for-trouble trade with the Padres for Carl Edwards Jr. Both pitchers had been struggling mightily in the big leagues. Wieck, however, turned it around when he came to Chicago. He lowered his ERA by three runs (6.57 to 3.60) and showed great strikeout potential (18Ks in 10 innings).

~Art Shamsky 1941– (Cubs 1972)
Shamsky was part of the Miracle Mets team that kept the Cubs out of the playoffs in 1969, but just a few years later he was wearing a Cubs uniform. The outfielder/first baseman was used in only 15 games, almost exclusively as a pinch hitter. He hit only .125 in that role before being released. He is a member of the National Jewish Sports Hall of Fame.

~Ed Eiteljorge 1871–1942 (Colts 1890)
Ed was born in Berlin, Germany, but came to America as a boy. When he joined the Cubs (then known as the Colts), he was still only 18. If you want to see Ed pitch in a Chicago uniform, set the wayback machine to May 2, 1890. He pitched two innings and gave up seven runs. He never pitched for Chicago again.

~Tom Poorman 1857–1905 (White Stockings 1880)
Poorman was part of the 1880 championship team. He played in right field for seven games, and hit .200. He was also an occasional pitcher, and won two games on the mound. Poorman later hit and pitched for Toledo, Boston, and Philadelphia.

~Charlie Waitt 1853–1912 (White Stockings 1877)
Charlie was considered one of the first baseball players to use a glove. He was mocked for it at the time. Charlie was a backup outfielder for the Cubs (then known as the White Stockings) in their second season in the National League. He managed only four hits in 41 plate appearances. That .098 batting average wasn’t quite enough to keep him in Chicago. He later played for Baltimore and Philadelphia.

~Hugh Casey 1913–1951 (Cubs 1935)
Hugh T. Casey pitched 13 games for the Cubs during their NL Pennant-winning season of 1935, then spent the next four years in the minors. In the minors they tried to get him to harness his wildness to no avail. The Cubs shipped him off to Brooklyn, and he eventually made it back to the big leagues with the Dodgers. Casey even won 15 games for them in 1939 — and made the All-Star team. But the war came along shortly thereafter and Uncle Sam came calling. Casey served in the military during the war, and when he returned, they converted him into a reliever in 1946. That’s where he got his nickname “Fireman.” On July 3, 1951, less than two years after his last appearance in the majors, he committed suicide following years of heavy drinking and womanizing. He was just 37 years old.