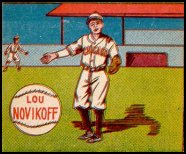 ~Lou Novikoff 1915–1970 (Cubs 1941-1944)
Lou was known as “The Mad Russian”. He was born to Russian immigrant parents in Arizona, so the second half of his nickname is obvious. The “mad” part came from his eccentric proclivities. He had a colorful past before joining the Cubs, working as a harmonica player, a carnival strongman, and a striptease performer. The Mad Russian became a wartime Cubs fill-in (1941-1944) and an entertaining eccentric. He said he feared touching Wrigley’s ivy-covered walls because he thought ivy was poisonous. He also claimed the foul lines were crooked. He once stole third with the bases loaded because, he said, “I got such a good jump on the pitcher.” He had a pet Russian wolfhound, which he only fed caviar. Novikoff could hit (he hit .300 twice), but was a butcher in the outfield. The Phillies gave him one more shot in 1946, but that was it for his very colorful major league career.

~Casey McGehee 1982– (Cubs 2008)
Casey was a September call-up for a Cubs team that led the league in victories. He didn’t get much playing time backing up Aramis Ramirez. The Cubs thought he wouldn’t be needed, so they essentially gave him away to Milwaukee. McGehee (pronounced ‘Mcgee’) responded by starting at third base and hitting over 20 homers and driving in more than 100 runs for Milwaukee in 2010. He was eventually replaced in Milwaukee by a free-agent signing…Aramis Ramirez.

~Tanyon Sturtze 1970– (Cubs 1995-1996)
The 6’5″ Sturtze came up with the Cubs, but only pitched in eight games over two seasons. He went on to have a pretty solid big league career, pitching for the Rangers, White Sox, Rays, Yankees, and Dodgers over twelve big league seasons.

~Jorge Pedre 1966– (Cubs 1992)
Jorge was a September call up for the Cubs in 1992, and got a grand total of four at-bats. He didn’t get a hit. Jorge was a catcher who played eight seasons in the minors, mostly in the Kansas City organization.

~Walter Signer 1910–1974 (Cubs 1943, 1945)
Walter was a minor leaguer in the 1930s, but when war broke out, and many big leaguers were drafted into the military, Walter made a comeback — hoping to finally make it to the Major Leagues. His plan worked. He got two very brief shots with the Cubs. He made ten appearances and posted an ERA of 3.00. In his 33 innings pitched, Walter only struck out five batters.

~Dick Cotter 1889–1945 (Cubs 1912)
The Cubs acquired Dick before the 1912 season for Peaches Graham. Cotter played catcher for the Cubs in their old home field West Side Grounds. In his one season in Chicago, he appeared in 26 games and batted .278.

~Malachi Kittridge 1869–1928 (Colts 1890-1897)
When your given name is Malachi, you’re bound to acquire a nickname. Kittridge went by his middle name instead; the equally unwieldly Jedediah. Kittridge was the starting catcher for the Cubs (then known as the Colts) for much of the 1890s. He didn’t hit well (except for the fluky .315 he hit in 1894), but he was a solid defensive catcher. After leaving Chicago, he also caught for Louisville, Washington, Boston, and Cleveland before finally hanging up his spikes in 1906.

~Derrick White 1969– (Cubs 1998)
White got called up during the summer of 1998 (their Wild Card season). He got ten plate appearances in a Cubs uniform and struck out five of those times. He also played for the Rockies, Expos, and Tigers in his big league career. He was an outfielder and first baseman.

~Glenn Beckert 1940–2020 (Cubs 1965-1973)
Glenn was a 4-time All-Star, a Gold Glove second baseman (1968), and for four seasons in a row, the toughest man to strike out in all of baseball. In 1971 he hit .342. Another season (1968), he led the league in runs scored. His scrappy play and willingness to do whatever it took to get on base is the reason he became a favorite of his manager, Leo Durocher. In his book Nice Guys Finish Last, Durocher, a man who rarely praised his players, said this about his second baseman: “I got a guy over here, Beckert, bustin’ his rear end. He works on his hitting. He works on his fielding. He works on all of his weaknesses. He’s made himself into a hell of a player.” That’s probably why Cubs fans loved him too.