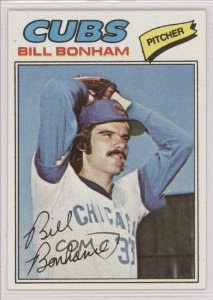 ~Bill Bonham 1948 (Cubs 1971-1977)
Bonham won 53 games for the Cubs during his time in Chicago, and even showed some flashes of promise. Unfortunately, he also once lost 22 games in a season (1974), and led the league in earned runs allowed in 1975. On July 31, 1974, Bonham became one of the few pitchers to strike out four men in one inning. His catcher dropped the third strike against Expos pitcher Mike Torrez, allowing Torrez to get on base, but Bill then struck out Ron Hunt, Tom Foli, and Willie Davis. A few years later Bonham was traded to the Reds for Bill Caudill and Woody Fryman. Bonham pitched in the big leagues until 1980. (Photo: Topps 1977 Baseball Card)

~Vance Law 1956 (Cubs 1988-1989)
Vance Law’s nickname (The long arm of the Law) was always a bit of a stretch, because Law didn’t have the greatest range as an infielder, but he did have one crucial requirement for the nickname; his last name. Part of a baseball family, Law’s father Verne starred in the majors himself. Law signed with the Cubs as a free agent for 1988, had a productive first half, and made the NL All-Star team. A bad back limited him in 1989, and he struck out in all three of his LCS at-bats.

~Chuck McElroy 1967 (Cubs 1991-1993)
McElroy was acquired from the Phillies in the trade that sent Mitch Williams to Philadelphia. The Cubs used him a lot of the bullpen. The lefty pitched in almost 200 games in his three seasons with the Cubs. In 1991 he finished fifth in the Rookie of the Year voting after posting a 1.95 ERA in 71 games. Over his three years with the Cubs, Chuck saved nine games and won 12. He was traded to the Reds after the 1993 season. 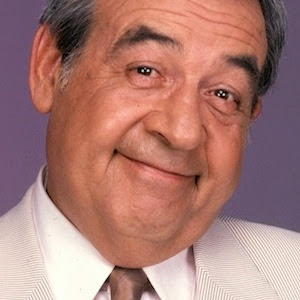 ~Tom Bosley 1927 (Cubs fan 1927-2010)
While growing up in Chicago, Tom Bosley dreamed of becoming the star left-fielder for the Cubs. He was 11 when the Cubs faced the Yankees during the 1938 World Series. That series featured Dizzy Dean’s last stand, Lou Gehrig’s last game, and Joe DiMaggio’s dagger home run into the Wrigley Field stands. Bosely was in the Navy when the Cubs faced the Tigers during the 1945 World Series. By then he knew his baseball dream would never come true (He told TV Guide in 1976 that his dream was ended simply by being “too short, too heavy, and not very good at sports”). As it turned out, the closest Bosley got to organized athletics was a sportscasting class at DePaul University after the war. After additional training at the Radio Institute of Chicago and two years’ practical experience in various dramatic radio programs and stock companies, he left for New York in 1950. But he never lost his love of the Cubs. Even during the glory years of Happy Days when he lived in Los Angeles and had season tickets to the Dodgers, he always rooted for the Cubs. “Tommy Lasorda still gives me grief and yells at me for being a Cubs fan,” he told People Magazine in 1979. He also put his name where his mouth was by becoming a member of the board of directors for the Die Hard Cubs Fan Club.