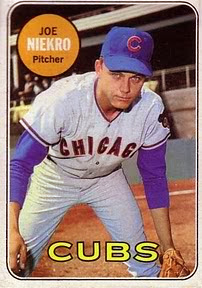 ~Joe Niekro 1944–2006 (Cubs 1967-1969)
His brother Phil was already a star pitcher for the Braves when Joe Niekro was drafted in the third round by the Cubs in 1966. In his rookie season in Chicago (1967), Joe won 10 games. He won 14 games for the Cubs in 1968, but manager Leo Durocher, never very good with young players, seemed to lose faith in him. Leo wasn’t alone in that assessment. Niekro’s ERA was a little high (it was a pitchers era) at 4.32, he was far from overpowering (only 65 strikeouts in 177 innings), and his control was a little shaky. When the Cubs had a chance to get veteran Dick Selma early in the 1969 season, they didn’t hesitate to include Joe Niekro in the deal. Selma won ten games for the Cubs that season, and really connected with the Bleacher Bums. It looked like the Cubs had made a pretty good deal, even though Selma was traded away the following season. Niekro bounced around the bullpens of Detroit and Atlanta for a while, never really making much of a name for himself. But while he was with the Braves, he finally perfected the knuckleball that had been the secret to his brother’s success, and his career really took off. The Astros put him in their rotation in 1977, and for the next eight seasons he averaged more than 15 wins a year, including back-to-back 20 win seasons in 1979 and 1980. By the time his career was over after the 1988 season, Joe Niekro had 221 career victories. Only 24 of those came for the team that drafted him and brought him to the majors: the Chicago Cubs. (Photo: Topps 1969 Baseball Card)

~Glendon Rusch 1974– (Cubs 2004-2006)
The soft-tossing lefty found a spot in the Cubs rotation for a few seasons, including a nine-win ’05 season, but he never really put more than an isolated streak together. In his final Cubs season he was 3-8, with a 7.46 ERA. He pitched in the World Series for the Mets in 2000 in the Subway Series versus the Yankees.

~Clarence Jones 1941– (Cubs 1967-1968)
Clarence backed up the corner outfielders (Billy Williams and Ted Savage) and first baseman (Ernie Banks) during the 1967 season, but despite performing pretty well in that role, he wasn’t a part of the Cubs future plans. He played sparingly in 1968, and was traded to the Reds (along with Bill Plummer) in 1969 for Ted Abernathy.

~Joe Hatten 1916–1988 (Cubs 1951-1952)
He served in the military during World War II, and didn’t make his big league debut until he was nearly 30 years old. He had a couple of good seasons with Brooklyn (including World Series seasons 1947 and 1949) before being included in that incredibly unfortunate (for the Cubs) deal that sent Andy Pafko to the Dodgers. Hatten won six games over two seasons as a spot starter in Chicago, and didn’t do well. After his time with the Cubs was over, he pitched another eight seasons in the minors before hanging up his spikes for good at the age of 43.

~Monte McFarland 1872–1913 (Colts 1895-1896)
Monte started only five games over two season for the Cubs (then known as the Colts). The right-handed pitcher had a record of 2-4 with a 6.36 ERA. After his brief stint in the big leagues, he played minor league ball for another 14 seasons. Monte passed away in Peoria at the way too young age of 41. His brother Chappie later played for the Cardinals.

~Reggie Patterson 1958– (Cubs 1983-1985)
Patterson was a highly touted pitching prospect the Cubs got from the White Sox, but he never quite could put it together in the big leagues. His big claim to fame was giving up the hit that allowed Pete Rose to tie Ty Cobb for the all-time hits record. It happened in Wrigley Field.