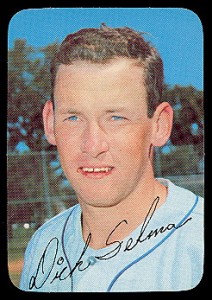 ~Dick Selma 1943–2001 (Cubs 1969)
He was nicknamed Mortimer Snerd by his teammates after Edgar Bergen’s famous dummy. Selma was a key member of the 1969 Cubs. He won 10 games for them and led the staff in strikeouts per nine innings after being acquired from the Padres. Selma became a fan favorite almost instantly because he led the Bleacher Bums in cheers from the bullpen. But 1969 was his only year with the Cubs. He was a part of the trade that brought Johnny Callison to the Cubs. Selma passed away in 2001 at the age of 58.

~John Grabow 1978– (Cubs 2009-2011)
Grabow was a very effective left-handed reliever with the Pirates for several seasons, so the Cubs went out and got him via trade (along with Tom Gorzelany). As soon as he arrived in Chicago, however, Grabow started to get knocked around. He developed arm problems, and missed a good chunk of the 2010 season. His last year in the big leagues was with the Cubs in 2011. In retrospect, that wasn’t a very good trade for the Cubs. They sent a few prospects to Pittsburgh in that deal, including future All-Star Josh Harrison.

~Angel Salazar 1961– (Cubs 1988)
Not to be confused with the actor who played Chi-Chi in Scarface, this Angel Salazar was the Venezuelan shortstop who played for the Royals and Expos before joining the Cubs as a backup in 1988. He backed up Shawon Dunston, Vance Law, and even Ryne Sandberg occasionally. That was the last year of his big league career.

~Carl Sawatski 1927–1991 (Cubs 1948-1953)
Swats or Swisher, as he was known by his teammates, was a backup catcher for the Cubs. His time in Chicago was interrupted by military service during the Korean War, so he really only played parts of three seasons with the Cubs. He later played for the White Sox, Phillies, and Cardinals (always as a backup), and was a member of the 1957 World Champion Milwaukee Braves. After his playing career he became the president of the Texas League (minors).

~Emil Kush 1916–1969 (Cubs 1941-1942, 1946-1949)
Emil was born in Chicago during the Cubs’ first season at Wrigley Field, and was a Chicago boy through and through. He played his entire big league career with the Cubs, and died a few months after they broke our hearts in 1969. The right-handed pitcher was a valuable member of the bullpen in the years after the war. Unfortunately for him, he missed the World Series season of 1945 because he was serving in the US Navy.

~Tommy Leach 1877–1969 (Cubs 1912-1914)
Leach arrived in Chicago in 1912 in exchange for two key members of the 1910 World Series Cubs team (King Cole & Solly Hofman). Leach was a renowned hitter — with a lifetime on-base percentage of .340. He had previously led the league in runs, triples, and homers with the Pittsburgh Pirates, and was part of their 1909 World Champion team. Tommy still had a few more good seasons in the tank. With the Cubs he led the league in runs again, stole more than 50 bases, and hit more than 90 extra base hits in two and half seasons.

~Eric Karros 1967– (Cubs 2003)
Karros only played with the Cubs for one year, but it was quite a year — the year the Cubs were within five outs of going to the World Series. When he wasn’t playing in the games, Karros was filming the historic moments from inside the Cubs dugout. The former Rookie of the Year with the Dodgers played pretty well in his only Cubs season. He hit 12 homers while splitting time at first base with midseason acquisition Randall Simon.