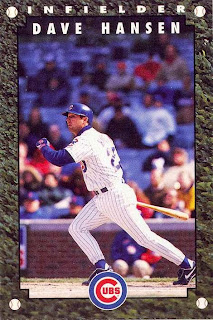 ~Dave Hansen 1968 (Cubs 1997)
Hansen was one of the best pinch-hitters of his generation. He played one full season for the Cubs in 1997, but that turned out to be a rather unpleasant experience. After being on a perpetual winner in Los Angeles, the 0-14 start the Cubs had in 1997 must have scarred him. After the season he left the country–and played in Japan for a year. He returned to play another seven big league seasons. In spring training of 2005, the Cubs signed him again. They cut him the day before the season began–so he finished his career with the Seattle Mariners. (Photo: Team Issued 1997 Baseball Card)

~Harry Wolfe 1892 (Cubs 1917)
Whitey, as he was known, played a little shortstop but was mostly a pinch runner and pinch hitter in the nine games he played with the Cubs in 1917. It was his only big-league season. He played seven minor league seasons.

~Billy Rogell 1904 (Cubs 1940)
The local boy (Fenger High School) played thirteen big league seasons for the Red Sox and Tigers before he finally got his chance to play for his hometown Cubs. He had been the starting shortstop of the Tigers team that beat the Cubs in the 1935 World Series. Billy was known as a slick fielder–he led the league in assists, putouts, doubleplays, and fielding percentage in the American League. With the Cubs he was the backup to Billy Herman, Bobby Mattick, and Stan Hack. It was his final season in the big leagues.

~Pete Noonan 1881 (Cubs 1906)
Pete played five games for the winningest team in baseball history (the 1906 Cubs) before being traded midseason for pitcher Jack Taylor. The catcher played the rest of his career for the St. Louis Cardinals.