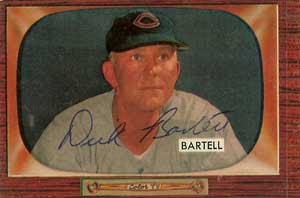 ~Dick Bartell 1907 (Cubs 1939)
Acquired in a trade with the Giants (for among others, starting shortstop Billy Jurges, and outfielder Frank Demaree), Dick was the starting shortstop for the Cubs in 1939. Bartell was accustomed to the hardscrabble New York media, and that didn’t serve him well during his time with the Cubs. His 1939 season started off badly in spring training when he made a blimp joke to a chubby sportswriter for the Chicago Tribune (Ed Burns). Imagine Bartell’s surprise when he discovered the Chicago media was a little more sensitive than New York’s, and that Burns just happened to be the writer who also served as the official scorer for the Cubs. That season Burns got revenge by giving Bartell an error at every opportunity, and taking away all borderline hits. Bartell hit only .238 for the Cubs after hitting over .300 seven times in the seasons before he joined the team. He also recorded the worst fielding percentage of his career. Ironically, Bartell was born in Chicago, and the worst season of his career was with the Cubs. The Cubs traded him after the season to the Tigers. He was Detroit’s starting shortstop in the 1940 World Series.

~Lew Burdette 1926 (Cubs 1964-1965)
He was a well known spitballer. Red Smith of the New York Times said that he needed three columns for his statistics: wins, losses, and relative humidity. Nevertheless, he won over 200 games in his career, was a three-time all-star, and pitched his team to a World Series title, but of course, that team was not the Chicago Cubs—it was the Milwaukee Braves. By the time he came to the Cubs, Burdette was 37 years old, and his career was pretty much over. He won 9 games for the Cubs in two seasons, and his ERA was over 5.

~Joe Nathan 1974 (Cubs 2016)
Nathan was a six-time All Star closer coming off an injury when the Cubs took a flier on him during a period of bullpen injuries, despite his advancing age (42). Nathan actually pitched well in his short stint with the Cubs, but when the injured players returned there wasn’t a roster spot left for him, and the Cubs chose to release him. He finished the season with the Giants.