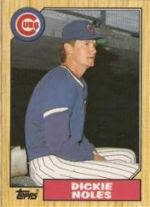 ~Dickie Noles 1956 (Cubs 1982-1984, 1987)
He was one of Dallas Green’s favorites, and the Cubs got him from the Phillies along with Keith Moreland shortly after Green arrived in Chicago. Noles would have gotten along great with the 1930 Cubs, Hack Wilson and Pat Malone. He was a drinker and a brawler, and was arrested after doing both in Cincinnati April of 1983. Dickie not only got into a fight with another tavern patron, he fought the bouncer, and he fought the cop who came to arrest him. Noles had an obvious alcohol problem, but unlike the Cubs from the 30s, Noles got treatment. He served 14 days of his 30 day sentence in alcohol rehab. Green traded Dickie the next season for two minor leaguers who never made it to the majors, but Dallas always had a soft spot for the former Phillie. In 1987 he signed him again. In one of the most unusual moves in baseball history, Noles was traded later that same season to the Tigers for a player to be named later. That player turned out to be Dickie Noles himself. Dickie remains the only person in major league history to be traded for himself. (Photo: 1987 Topps Baseball Card)

~Jeff Gray 1981 (Cubs 2010)
The Cubs acquired him from the A’s in the trade that sent Jake Fox and Aaron Miles to the A’s. Gray appeared in 7 games for the Cubs in middle relief and didn’t fare well. He allowed 17 baserunners in only nine innings pitched. He was released after the season. Gray later pitched for the White Sox, Mariners, and Twins.

~Jeff Hartsock 1966 (Cubs 1992)
Jeff came to the Cubs in a trade from the Dodgers for fellow reliever Steve Wilson. Wilson pitched well for the Dodgers, but Hartsock only made four appearances in September of 1992. They were the only four appearances of his big league career. He pitched seven seasons in the minors.

~Manny Jimenez 1938 (Cubs 1969)
Jimenez was in his seventh big league season when he came to the Cubs. The 30-year-old outfielder was used strictly as a pinch hitter by the Cubs. He came up six times, struck out twice, got one hit, and was released. He never played in the big leagues again. Don’t blame Manny for the collapse of 1969. His last game was in May. Manny’s brother Elvio played for the Yankees.

~Stu Martin 1912 (Cubs 1943)
He was an all-star in rookie season for the Cardinals in 1936 and led National League second basemen in fielding percentage in 1939, but by the time came to the Cubs Stu was strictly a backup. The infielder hit .220 in the last 64 games of his big league career. 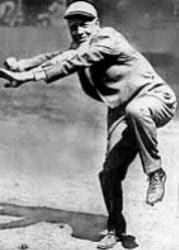 ~Billy Sunday 1862 (White Stockings 1883-1887)
One of the most famous players in Chicago baseball history. The story of his fame began in the summer of 1886. Sunday was out carousing in Chicago with his fellow players Mike King Kelly, Ned Williamson, and Silver Flint on Van Buren Street, nearby the many famous decadent State Street saloons (in the Levee section of town). They were totally drunk, sitting in a gutter, and the sun was coming up. While they tried to rouse themselves, a gospel wagon drove up and conducted a service. Sunday recognized the songs from his childhood in Ames, Iowa and saw the light at that moment. He said to his buddies: “Boys, it’s all off; we have come to where the roads part.” He swore off booze forever, and dedicated himself to God. He would later be one of the leading voices in favor of Prohibition. He still played baseball a little longer, but he now he was playing with God on his shoulder. When he became one of the most famous evangelists in America, he would tell the story of the day God helped him in the field.

“I saw the ball coming out to right field like a shell out of a mortar, and it was up to me. There were thousands of people out in the field, for the grandstand the bleachers had overflowed. I whirled and went with all my speed. I was going so fast that day you couldn’t see me for the dust. I yelled to the crowd ‘Get out of the way!” and they opened up like the Red Sea for the rod of Moses. And as I ran I offered my first prayer, and it was something like this: ‘God I’m in an awful hole. Help me out, if you ever helped mortal man in your life; he me get that ball. And you haven’t much time to make up your mind. I am sure the Lord helped me catch that ball. It was my first experience with prayer.”

But not his last. After he quit baseball he toured the country as an evangelist—using incredible theatrics to get his point across. He was a friend to Presidents, and one of the most famous people in America. The song “Chicago Chicago” includes a line about him: “The town that Billy Sunday could not shut down.” Some say the ice cream sundae was even named after him. But it all began with a bunch of ballplayers sitting in a Chicago gutter in 1886.