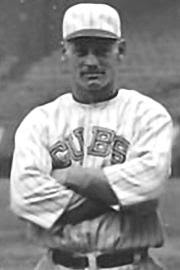 ~Les Mann 1892 (Cubs 1916-1919)
Mann was nicknamed Major after the World War 1 flying ace, Major Harry Mann. He was an outfielder for the Cubs in their inaugural season at the ballpark now known as Wrigley Field, but had also played there the year before, with the Federal League Whales. He actually became famous for a few things he did off the field, more than his career on the field (which was pretty good). Mann headed a player revolt for better shares in the 1918 World Series as a member of the pennant-winning Cubs. Late in his career he turned in a former 1918 Cubs teammate, Giant pitcher Phil Douglas, for writing him a letter inviting a bribe in 1922. In 1936, after his playing days were over, he convinced the World Olympic Committee to add baseball as an exhibition event, and brought two teams over to play in Nazi Germany for the 1936 Olympics. They drew a larger crowd in Berlin than had ever attended a World Series game in America.

~Shawn Camp 1975 (Cubs 2012-2013)
Camp didn’t pitch in every game for the Cubs in 2012–it only seemed like it. He did lead the league in appearances that season with 80. And while he started off strong, that wear and tear eventually caught up with him. By the end of the season he was getting knocked around regularly, and the following season it was worse. When the Cubs released him in July of 2013, his ERA was north of 7.

~Tom Gordon 1967 (Cubs 2001-2002)
Flash, as he was known, had a stellar big-league career as a starter and a reliever. He was predominantly a starter for the Royals at the beginning of his career, including six seasons with double-digit wins. The Red Sox converted him into a closer and he responded with an all-star season and a league-leading 46 saves. Unfortunately, Gordon blew out his arm. When the Cubs acquired him as a free agent, it had been more than a year since he pitched. He repeated the Boston experience. His first year with the Cubs, Gordon was excellent. He saved 27 games. The following year he hurt his arm again. When the Cubs traded him to the Astros they thought he was pretty much finished. He wasn’t. Flash pitched another six seasons for the White Sox, Yankees, Phillies, and Diamondbacks. His son Dee is an all-star second baseman.

~Ron Coomer 1966 (Cubs 2001)
Coomer was brought in as a free agent as a 34-year-old in 2001. He played third base and first base for the Cubs, but didn’t quite live up to his former all-star status. The Cubs let him go after the year and he finished his big league career with the Yankees and Dodgers. Ron was named the radio color commentator for Cubs games in 2014.

~Jamie Moyer 1962 (Cubs 1986-1988)
He was known mainly as Digger Phelps’ son-in-law when he came up with the Cubs in 1986. The soft-tossing lefty had some good moments in a Cubs uniform. He was an innings-eater who pitched more than 200 innings twice with the Cubs, and he won 28 games over his three-year tenure. Unfortunately for Chicago, he was included in the trade that brought Mitch Williams to the Cubs. All Moyer did is pitch another 22 seasons in the big leagues and win 269 games. He also became an all-star and a World Series champ.

~Steve Henderson 1952 (Cubs 1981-1982)
The Cubs got Henderson from the Mets in the trade that sent Dave Kingman back to New York. Truth be told, the Cubs would have taken a bag of balls for Kingman by that point because he had so thoroughly worn out his welcome. Henderson was much better than that, but he never quite lived up to his potential. Scouts saw him as a can’t miss power hitter (he had earlier been part of the trade that sent Tom Seaver to the Reds), but he never hit more than twelve homers in a season. He hit only seven in Chicago over two full seasons. After the 1982 season the Cubs traded him to the Mariners for Rich Bordi.

~Dan Briggs 1952 (Cubs 1982)
The Cubs acquired the first baseman/outfielder from the Expos before the 1982 season, but he didn’t have much of an impact. He played his final big league game in a Cubs uniform in July of that year. Briggs finished his seven-season big league career as a .195 hitter.

~Cal Koonce 1940 (Cubs 1962-1967)
Cal won ten games for the Cubs as a rookie in 1962, and that’s saying something. That team won only 59 games all season. Over the next few seasons he started and relieved for the Cubs, never really achieving excellence in either role. His main problem was command of the strikezone. He won 29 games and saved 4 in his six years with the Cubs. He was traded to the Mets in 1967 and became a key part of the bullpen of the Mets team that broke the Cubs hearts in 1969.

~Frank Griffith 1872 (Colts 1892)
If you want to travel back in time to see Griffith pitch for the Cubs (then known as the Colts), set the wayback machine for August 13, 1892. That was his only appearance for the team. The Northwestern University product started and was knocked out of the game after only four innings. He gave up six walks and three hits (including a homer) and finished with an ERA of 11.25. 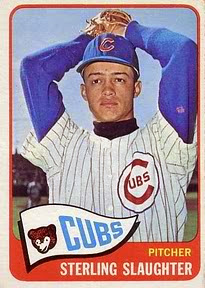 ~Sterling Slaughter 1941 (Cubs 1964)
One of the all-time great names in Cubs history, Slaughter was a 22-year-old rookie pitcher with the Cubs in 1964. In his first start he combined on a one-hitter with Lindy McDaniel. His second start was a six hitter. Unfortunately, that turned out to be a tease, because the youngster didn’t win another game in his entire big league career. He developed arm problems and his rookie season was also his last. He is a member of the Arizona State University Baseball Hall of Fame.