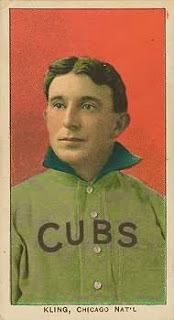 ~Johnny Kling 1875–1947 (Cubs 1900-1911)
Kling was one of the best catchers in baseball; a grizzled veteran who was so good defensively, he caused former catcher Frank Chance to move positions (to first base). Hall of Fame pitcher Mordecai “Three Finger” Brown often said that his secret weapon was Johnny Kling. Kling (nicknamed “Noisy” and “The Jew”) was loved by his teammates because of his gritty attitude, loved by the umpires because he didn’t swear, smoke, or drink, and loved by the fans. He was the starting catcher for all four pennant-winning teams in the first decade of last century (1906, 1907, 1908, 1910), and the pitchers claimed that his absence, and his absence alone, was the only reason the Cubs didn’t win five pennants in a row. Kling sat out the 1909 season to pursue and win the World Pockets Billiard Championship. After a salary dispute, the Cubs traded him in 1911.

~Steve Bilko 1928–1978 (Cubs 1954-1957)
When he arrived from the St. Louis Cardinals on April 30, 1954, Bilko looked like a ferocious slugger. He was 6’1” and weighed anywhere from 230 to 260 pounds, and most of it was solid muscle, but he didn’t do much for the Cubs in 1954. They gave him 92 at-bats with the big club before sending him down to the minors. At the time, the Cubs minor league team was in Los Angeles, California, and that’s where Bilko became a cult hero. In three minor league seasons for the minor league LA Angels, Bilko hit .330 and slugged 148 home runs. He became a huge box office attraction and got the attention of Hollywood. One Hollywood star, Phil Silvers, even named a television sitcom character after him. The name Bilko is now most associated with that memorable character in The Phil Silvers Show, but to Cubs fans, Bilko was just another player who could do well at the minor league level, but never in the big leagues. They traded him to the Cincinnati Reds after the 1957 season.

~Arodys Vizcaino 1990– (Cubs 2014)
Vizcaino was damaged goods when the Cubs acquired him in the trade that sent Reed Johnson and Paul Maholm to the Braves in 2012. He was coming off Tommy John surgery. Arodys rehabbed for two full seasons before coming back in 2014. He spent most of the season in the Cubs minor league system, but was brought up for a cup of coffee in September of 2014. In that small taste, he showed flashes of why the Cubs brain trust went after him in the first place. His stuff was electric. Needless to say, it was a surprise when they traded him back to the Braves the following season. The Cubs did get Tommy LaStella in return, but the Braves got a closer. Arodys saved 30 games for them over the next three seasons.

~Bob Garbark 1909–1990 (Cubs 1937-1939)
Garbark was a backup catcher in the big leagues for seven seasons, three of which were with the Cubs. Of course, he was backing up Hall of Famer Gabby Hartnett at the time, so Bob didn’t get a lot of playing time. He appeared in 48 games over three seasons, and didn’t get a single extra base hit. He later played for the A’s and the Red Sox. Bob was also an All-American football player in college.