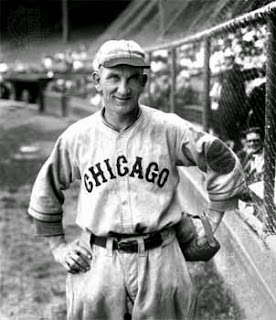 ~Rabbit Maranville 1891–1954 (Cubs 1925)
His real name was Walter. Nicknamed for his speed and rabbit-like leaps, Rabbit Maranville was always a great fielder, but he was even better known for his partying. When he was with the Pirates he was known for playing with a flask in his pocket. One time (with the Cubs in spring training 1925) he was goofing around on the golf course with Charlie Grimm, who laid on his back and put a tee in his mouth with a ball on it, as a joke. Maranville hit the ball with a driver, scaring the hell out of Grimm. The first night after he became Cubs manager, he barged into the players’ Pullman cars and threw cold water on their faces, saying “there will be no sleeping under Maranville management.” That same night he got into a fight with a cab driver in New York after the Cubs arrived there over the cabbie grumbling about his tip. He had to be separated from the cabbie by the cops. After they separated him, he went after the cops and was arrested along with two of his players. He had no set rules for the team except that they couldn’t go to bed before him. Another time he held the Cubs traveling secretary out of a hotel window by his feet. Yet another time, and as it turns out, the final incident, he ran through the train throwing the contents of a spittoon at his players. With Rabbit as manager, the Cubs finished in last place for the first time in franchise history. He was fired after eight weeks. Rabbit played for another ten years (with Brooklyn, St. Louis, and Boston), and was inducted into the Hall of Fame in 1954. That was just a few months after he died. Rabbit still holds the record for most hits of any MLB player born in Massachusetts.

~Scott May 1961– (Cubs 1991)
Scott was a September call-up at the end of the 1991 season and appeared in two games. The right-handed reliever gave up six hits and four earned runs in only two innings (an ERA of 18.00). It was his last chance at the big leagues. He previously had a cup of coffee with the Rangers.

~Bert Abbey 1869–1962 (Colts 1893-1894)
The pitcher was born in Vermont during the Ulysses S. Grant administration and was a teetotaler. That didn’t go over so well with his Cubs (then known as the Colts) teammates. They were one of the rowdiest teams in baseball history, but Bert was a Christian gentleman. At a time of rampant racism, Bert famously looked all the Negro porters in their eyes and tipped them into their hands instead of throwing money at their feet (which was the common practice at the time). His teammates also disliked him for that. Nevertheless, he probably would have stayed with Chicago if he had delivered on the field, and that’s where Abbey fell a little short. He pitched for two seasons, won four games, and posted an ERA over five. 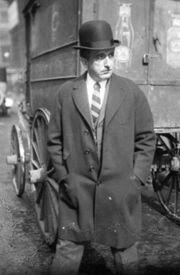 ~J. Ogden Armour 1862–1927 (Cubs minority owner 1916-1919)
Armour was Chicago’s meat-packing king, the man skewered by Upton Sinclair in The Jungle, but he was also a big Cubs fan. He bought into the team for $50,000 and convinced a good buddy of his to do the same: William Wrigley. The year was 1916, and those men along with former Whales owner Charlie Weeghman were the saviors of the Cubs…the men who got the dreaded, hated Charles Murphy out of the game. At the time, J. Ogden Armour was one of the three richest men in Chicago. When the stock market slumped after World War I, Armour did too, and he was forced to sell his portion of the Cubs. He was also forced out at the meat-packing business his father founded after he lost a million dollars a day for 130 days in a row. Armour saw his last Cubs game in 1923. He retired to California shortly after that. In 1927 on a trip to London, he fell ill and died. He had less than $25,000 in his personal accounts.