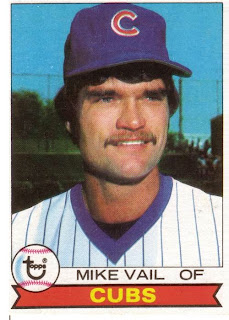 ~Mike Vail 1951– (Cubs 1978-1980)
He was already in his fourth big league season when the Cubs acquired Vail in the trade that sent Tarzan Wallis to the Indians. Vail was a talented hitter who hit well over .300 in his time with the Cubs, but he didn’t have a lot of power, didn’t walk a lot, and his play in the outfield was considered below average. In short, he was a bit of a one-dimensional player. After the 1980 season he was traded to the Reds for third baseman Hector Cruz. He also played for the Giants, Dodgers, Expos, and Mets in his ten-year career.(Photo: Topps 1979 Baseball Card)

~Micah Bowie 1974– (Cubs 1999)
Bowie was one of the highly touted pitching prospects the Cubs got in a trade with the Atlanta Braves (for Terry Mulholland and Jose Hernandez), but they quickly discovered that he wasn’t much of a pitcher. Bowie was absolutely torched in eleven starts. His ERA was 9.96. He gave up 73 hits (including eight homers) and 30 walks in only 47 innings pitched. The Cubs released him after he had similar results in the minors the next few seasons. Bowie did eventually come back and pitch in the big leagues for the A’s, Nationals, and Rockies.

~Chick King 1930–2012 (Cubs 1958-1959)
The center fielder was mainly a career minor leaguer who got an occasional taste of the show for the Tigers, Cardinals, and Cubs. Over five seasons, he had only 76 career big league plate appearances. He was a .280 hitter in his eleven years of minor league ball. King was an All-American football player in high school.

~Carmen Mauro 1926–2003 (Cubs 1948-1951)
Carmen was a local kid (Morton High School in Cicero) who got his first real chance to play in the big leagues with the 1950 Cubs. He served as the Cubs fourth outfielder that season, backing up Hank Sauer, Andy Pafko, and Bob Borkowski. Unfortunately for Carmen, he wasn’t much of a hitter. He hit only .227 that season, and his lifetime batting average was only .231. He later also played for the Dodgers, Senators, and A’s.

~Willie McGill 1873–1944 (Colts 1893-1894)
They called him “Kid” because he was only 16 when he came up to the big leagues in 1890 with Cleveland. By the time he pitched for the Cubs, McGill was a wise old man of 19. He won 17 games for the Cubs (then known as the Colts), but had a terrible year in 1894 and was cut loose. By the time he was 22 years old, Kid was finished. He pitched for six teams in his six year career. After his baseball career, McGill attended the University of Notre Dame.

~Fred Roat 1867–1913 (Colts 1892)
Fred was such an obscure player for the Cubs (then known as the Colts), that there’s not even a record of whether he batted right or left-handed. He played second base for eight games and hit .194. After his short stint in the big leagues, he played another eleven seasons in the minors.