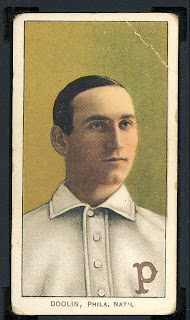 ~Mickey Doolin 1880–1951 (Cubs 1916)
Doc, as he was known, was part of the first Cubs team to play at Wrigley Field. The previous season Doolin had also called the ballpark home–as a member of the Federal League Whales. When team owner Charles Weeghman merged the Whales/Cubs teams, he cherry picked the best of each club to form the 1916 Cubs. Mickey was 36 years old, but he had established a reputation as a slick fielding shortstop (mostly with the Phillies). He led the league in assists six times, double plays seven times, and fielding percentage twice. Mickey’s glove is what kept him in the big leagues for 13 years, but it didn’t keep him on the Cubs roster the entire 1916 season. They released him in June.

~Al Epperly 1918–2003 (Cubs 1938)
Epperly was the youngest player in the majors when he was called up by the 1938 Cubs. He was like a babe in a tub. That’s why his teammates nicknamed him Tub. Epperly pitched only 27 innings for the team, but the Cubs still had high hopes for his future. Unfortunately for Tub, he didn’t make the team the following year, and languished in the minors several more years before being drafted into the service during the war. In what can only be described as a Hollywood ending, Tub made it back to the big leagues five years after the war ended. Brooklyn called him up in 1950, at the age of 32. Epperly got to pitch in the big leagues one last time, making five appearances for the Dodgers.

~John Flavin 1942– (Cubs 1964)
Flavin showed some promise in the Reds minor league system, so the Cubs thought they were getting a pretty good pitcher when they claimed him. He was only 22 years old, and was coming off a 12-2 season at Triple A. Unfortunately, it didn’t work out for Flavin in Chicago. He appeared in five games, and had a 13.50 ERA in 4.2 innings.

~Eddie Pick 1899–1967 (Cubs 1927)
Eddie was a third baseman and outfielder who got a few cups of coffee in the big leagues with the Reds, but his biggest opportunity came with the 1927 Cubs. That year he got 181 at-bats as the Cubs utility man, logging playing time at 2B, 3B and right field. Unfortunately, he didn’t take advantage of the opportunity, hitting only .171. Pick played another six seasons of minor league ball before retiring from the game at the age of 34.

~Sam Shaw 1863–1947 (Colts 1893)
Sam was a little guy, only 5’5″, 140 pounds, and the 30-year-old had bounced around the minors for several seasons before arriving in Chicago during the 1893 season. He started two games for the Cubs (then known as the Colts) in June of that year, and won one of them. He also walked thirteen batters in only sixteen innings, which wasn’t good enough to cut it in the big time. Shaw finished up his baseball career in the southern leagues, before hanging up his spikes for good after the 1896 season.