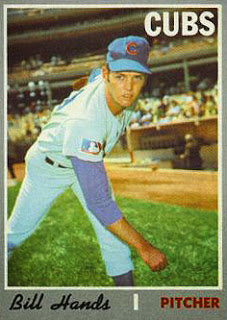 ~Bill Hands 1940–2017 (Cubs 1966-1972)
Bill Hands was nicknamed “Froggy” because his style was reminiscent of Don Larsen, who was with the Cubs at the end of his illustrious career, and the beginning of Hands career. Larsen was nicknamed Froggy, so Hands was given the nickname too. Hands became a 20-game winner in 1969 and helped the Cubs to a second-place finish behind the Mets. He won another 18 games for the Cubs in 1970, and on August 3, 1972, he had his best performance as a Cub, beating the Montreal Expos 3-0. With Hands one out away from a no-hitter, Ken Singleton hit a little ground ball toward second base, and Hands tried to catch it. It went off his glove and away from second baseman Paul Popovich, ending the no-hitter. The Cubs traded him after the 1972 season to the Minnesota Twins for Dave LaRoche. After pitching for two seasons with the Minnesota Twins, and one more with the Rangers, Hands retired after the 1975 season. After his baseball career, he moved to rural New York and bought a gas station. (Photo: Topps 1970 Baseball Card)

~Tom Baker 1934–1980 (Cubs 1963)
Baker was a left-handed pitcher who got a cup of coffee with the Cubs in 1963, pitching mainly out of the bullpen (although he did have one start). In ten appearances he posted a very respectable 3.00 ERA. Unfortunately for Baker, he was a 29-year-old rookie, and there isn’t a lot of call for 30-year-old pitchers with limited big league experience. He pitched a few more years in the minors before hanging up his spikes for good.

~Leo Burke 1934– (Cubs 1963-1965)
The Cubs acquired the utility man from the Cardinals in exchange for relief pitcher Barney Schultz. Barney became a key member of the 1964 Cardinals bullpen, and Leo stuck with the Cubs for several seasons as a jack of all trades. He played some infield, some outfield, and pinch hit for the Cubs. 1964 was his best season in the big leagues, when he got up to bat more than a hundred times for the only time in his career. He knocked in 14 runs and hit .262.