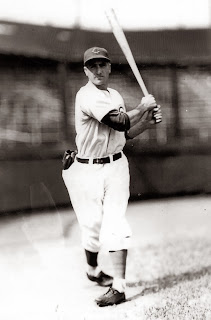 ~Lennie Merullo 1917–2015 (Cubs 1941-1947)
Lennie was the starting shortstop for the Cubs in the 1940s, including the pennant winning season of 1945. He wasn’t known as a great fielder or hitter. In fact, Merullo averaged an error every three and half games or so (172 errors in 602 games, including four in one inning in 1942), a home run every 345 at-bats (a grand total of 6 in 2071 at bats), and had a lifetime average of .240. But he was one of the team leaders. Lenny got into a couple of famous fights sticking up for his teammates. One time he fought former Cub Eddie Stanky, leading to a benches clearing brawl. Another time, Lenny and Phil Cavarretta were attacked by Dixie Walker before the game, and had to be pulled off by the police. Merullo got an eight game suspension. Lenny Merullo retired after the 1947 season. He became a scout after his playing days. Lenny’s grandson Matt also played in the big leagues. When Lenny passed away at the age of 98, he was the last surviving member of the last Chicago Cubs World Series team. The Cubs won it again the year after Lennie’s death.

~Dave Gumpert 1958– (Cubs 1985-1986)
Gumpert had his best season as a pro with the Cubs in 1986. He appeared in 38 games out of the bullpen, won two games and saved two. The following year the Cubs traded him (along with Thad Bosley) to the Royals for catcher Jim Sundberg.

~Jim Kirby 1923–2009 (Cubs 1949)
Kirby’s big league career lasted exactly twelve days. He celebrated his 26th birthday as a big leaguer with the Cubs. During those twelve days in May of 1949, Kirby got into three games. He went 1 for 2 in those limited opportunities, giving him a .500 career batting average. His only hit was a single against Reds pitcher Buddy Lively on May 13, 1949. The Cubs lost that game 7-0. Kirby played in the minor leagues until 1958.

~Tom Vickery 1867–1921 (Colts 1891)
Vinegar Tom, as he was known, pitched in Chicago for one year and went 6-5 in 14 appearances. He threw complete games in 7 of his 12 starts, but had a 4.07 ERA. In the deadball era, those were not great numbers. There’s no record of why Vickery was saddled with the nickname (other than his first name perhaps?), but Vinegar Tom was a demon that looked like a cross between a cat and a greyhound dog, according to writings going back to the 17th century.