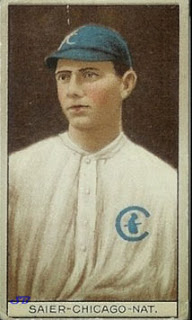 ~Vic Saier 1891–1967 (Cubs 1911-1917)
Vic was one of the players who played in the last season at West Side Grounds, and the Cubs’ first season at Wrigley. The first baseman had huge shoes to fill on the Cubs–he replaced the Peerless Leader, Frank Chance. When he was healthy, Saier was a beast–a combination of speed, power, and clutch hitting. In 1913 he hit 21 triples, drove in 92 runs, stole 26 bases, and hit .289. He hit a career high 18 dingers the following season, and had another solid year in 1915. But that season he suffered a bad leg injury, and Vic was never the same. The injury robbed him of his speed–a key ingredient of his game. Saier was done by 1919 at the age of 28.

~Cy Block 1919–2004 (Cubs 1942-1946)
Cy played briefly for the Cubs during the 1942 season, but Uncle Sam stole him before the 1943 season began. Block returned to the roster before the end of the 1945 season, in September, just a few weeks before the World Series. He didn’t get a chance to bat in the Series, but he did come in as a defensive replacement. (Cy played 2B and 3B). The Cubs sent him to the minors for the 1946 season when all of their war-time players returned, but in September Cy got one more shot at the bigs, his final four major league games. After his playing career was over, he became a successful businessman and philanthropist. Block died in September 2004 in the midst of that season’s notorious Cubs collapse.

~George Will 1941– (Cubs fan 1946-Present)
George Will is a conservative political writer, commentator, and pundit, who waxes philosophic about the state of politics for a living. But he’s also famously a die-hard baseball fan, and wouldn’t you know it, a Cubs fan. An intellectual Cubs fan, no less. He revealed the depth of Cubs history while delivering the commencement address at Washington University in 1998.

“I grew up in Champaign, Ill., midway between Chicago and St. Louis. At an age too tender for life-shaping decisions, I made one. While all my friends were becoming Cardinals fans, I became a Cub fan. My friends, happily rooting for Stan Musial, Red Schoendienst and other great Redbirds, grew up cheerfully convinced that the world is a benign place, so of course, they became liberals. Rooting for the Cubs in the late 1940s and early 1950s, I became gloomy, pessimistic, morose, dyspeptic and conservative. It helped out of course that the Cubs last won the World Series in 1908, which is two years before Mark Twain and Tolstoy died. But that means, class of 1998, that the Cubs are in the 89th year of their rebuilding effort, and remember, any team can have a bad moment. So fellow members of the Class of 1998, my last piece of advice is – Mamas don’t let your babies grow up to be Cub fans.”

George Will has written about the Cubs many times, but in early 2008, he may have actually contributed something to the collective Cubs psyche. He tried to look on the bright side of being a Cubs fan, citing an actual scientific study. From his Newsweek column…

Jordan Grafman, a senior investigator at the National Institute of Neurological Disorders and Stroke, was born and raised in Chicago, so he knows whereof he speaks when he speaks, politely, about the “paradox” of being a Cub fan even though baseball is supposed to provide relief from life’s problems. Grafman has been to a pleasant purgatory, Wrigley Field, and returned with good news: Yes, rooting for the Cubs is a minority taste because it is an interminable tutorial in delayed gratification, but “there is some evidence that being in the majority (everyone loves a winner) reduces reflective thinking.” Rooting for a loser makes one thoughtful, or perhaps neurotic, which on Chicago’s North Side may be a distinction without a difference. “The scientific literature,” Grafman says, “suggests that fans of losing teams turn out to be better decision-makers and deal better with divergent thought, as opposed to the unreflective fans of winning teams.”

That’s us. Great decision makers. Even though, as he admitted in his 1998 commencement address, we might have made one tragically bad decision in our childhoods.

~Ox Miller 1915–2007 (Cubs 1947)
His real name was John Anthony, and he was 6’1, 190 pounds, which by 1947 standards…was as big as an Ox. He finished his undistinguished (mostly war-time) career with the Cubs. Ox made 4 starts for the Cubs, went 1-2, and had an ERA of 10.13 (three of his four major league seasons he had ERA over 6.50). On the other hand, Ox actually hit pretty well for a pitcher. He hit a home run (a grand slam) for the Cubs and batted .429. Teammates on that 1947 Cubs team included both players who were shot by women during a season…Eddie Waitkus and Billy Jurges. (Waitkus wouldn’t be shot for another two years). The 1947 Cubs were interesting, but they were bad. They finished in 6th place with a 69-85 record.

~Ben Grieve 1976– (Cubs 2004-2005)
Grieve is the son of a big-leaguer–his father Tom played for the Texas Rangers. Ben got a great start to his own baseball career when he won the Rookie of the Year award in 1998 with the Oakland A’s, but by the time he came to the Cubs he was a fourth outfielder. He played sparingly for the Cubs in that role. Chicago was the last stop in his big league career.

~Miguel Cairo 1974– (Cubs 1997, 2001)
Miguel had a very impressive 17-year big league career. He played for ten different teams, including six playoff teams, and amassed nearly 4000 at-bats. Two of his 17 seasons were played in Chicago. He backed up Ryne Sandberg during the Hall of Famer’s final season, and then played a bigger role during his second stint with the Cubs, backing up second base, shortstop, and third base. The closest he came to playing in the World Series was with the 2004 New York Yankees. That’s the team that had a 3-game lead to the Red Sox in the ALCS before blowing the series.

~Manny Aybar 1972– (Cubs 2001)
Aybar pitched in the big leagues for eight seasons, but he never achieved any kind of lasting success. In his one season with the Cubs his ERA was 6.35. He gave up five homers in only 22 innings. Manny’s lifetime ERA was 5.11.

~Ted Turner 1892–1956 (Cubs 1920)
That’s right, Ted Turner played for the Cubs. Obviously we don’t mean the thin-mustachioed media mogul. This Ted Turner was a pitcher. On April 20, 1920, Ted came in during the second inning after the Cubs starter Chippy Gaw had been tagged for 5 hits and 2 runs. He didn’t do much better. He lasted one and a third innings, and gave up two earned runs. He faced only six batters, but one of them was the greatest right-handed hitter in history, Rogers Hornsby. The Cubs lost 10-3. It was the only appearance of Ted Turner’s big league career.

~John Malarkey 1872–1949 (Orphans 1899)
Malarkey’s nickname was not “Bunch Of” which is what we would have called him. His teammates nicknamed him Liz. He only pitched one game for Chicago, but it was a complete game. He gave up 19 hits and 13 earned runs on September 13, 1899. The Cubs (then known as the Orphans) lost to the New York Giants 13-2. In 1902 Malarkey made baseball history while with Boston when he became the first pitcher to win a game by hitting a walk-off home run. 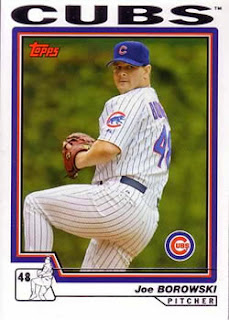 ~Joe Borowski 1971– (Cubs 2001-2005)
Joe was the ultimate blue collar player–a New Jersey kid who got into the big leagues thanks to his hard work and moxie. In 2003 he fell into the closer role and kept the job the rest of the season. His 33 saves were key to winning the division that year. Joe hurt his arm the following year, however, and struggled over his last few seasons in Chicago. Borowski had one more turn as a closer a few years later. He saved 36 games for the Marlins in 2006 and 45 games for the Indians in 2007. Joe’s luck ran out the next year…his last one in the big leagues. (Photo: 2004 Topps Baseball Card)