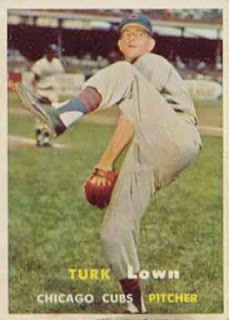 ~Turk Lown 1924–2016 (Cubs 1951-1958)
His real name was Omar Joseph Lown, but everyone called him Turk because he loved to eat turkey. The Cubs thought he was a starter, but after his 16-27 record as a starter — with an ERA over five, they moved him to the bullpen once and for all in 1956. Turk went to the White Sox a few years later and pitched on their pennant-winning team of 1959. He led the American League in saves that year. (Photo: Topps 1957 Baseball Card)

~Tony Campana 1986– (Cubs 2011-2012)
The speedy Campana was a big hit with Cubs fans because of the excitement he stirred every time he reached base. In limited opportunities, he stole 24 and 30 bases in his two years with the Cubs. He also once hit an inside-the-park home run — the only homer in his entire career (minor and major leagues). Unfortunately for Tony, he couldn’t steal first, and he didn’t take walks. He was released before the 2013 season and signed with the Diamondbacks.

~Jairo Asencio 1983– (Cubs 2012)
When he signed with the Braves, he was using a false name (Luis Valdez) and birthday, and that caused him some visa problems early in his career. Jairo pitched briefly for the Braves and the Indians, and the Cubs claimed him off waivers. He pitched exclusively out of the bullpen in 12 games for the Cubs in 2012. His ERA in 14.2 innings was 3.07. After the season, he was released.

~Jae Kuk Ryu 1983– (Cubs 2006)
Ryu pitched in ten games for the Cubs and got pounded pretty hard. His Cubs ERA was 8.10. He later pitched for the Rays too. But Ryu is probably best remembered for what he did in the minor leagues. He threw a ball at an osprey, a protected bird in Florida, and it died a few days after he hit it. Shortly after that incident Ryu returned to his native Korea.

~Scott Eyre 1972– (Cubs 2006-2008)
Eyre was a veteran bullpen guy when he came to the Cubs as a 34-year-old in 2006. He pitched quite a lot in his first season, but fell out of favor quickly when Lou Piniella became the team’s manager the following season. It got so bad at one point that Lou honestly couldn’t even remember Eyre’s first name. The Cubs traded him to the Phillies in 2008, and Eyre had the last laugh. He and his Phillies teammates won the World Series.

~Jay Loviglio 1956– (Cubs 1983)
Jay only played in one game for the Cubs, on July 26, 1983. He pinch hit for Warren Brusstar in the 7th inning against the Dodgers and struck out against Fernando Valenzuela. Mel Hall struck out right after him and threw a tantrum and was tossed out of the game. Fernando and the Dodgers beat the Cubs at Wrigley Field, 5-2. Jay became a minor league coach after his playing days.

~John Felske 1942– (Cubs 1968)
Felske appeared in four games as a Cub in 1968 as a catcher. He got a grand total of two at-bats and didn’t record a hit. The following year he was taken in the expansion draft. He later managed in the minors, coached in the big leagues, and even briefly served as the general manager for the Philadelphia Phillies. 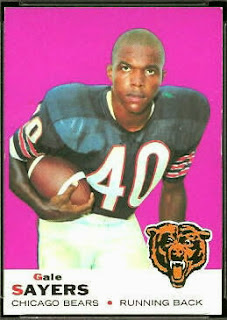 ~Gale Sayers 1943– (Bears in Wrigley, 1965-1970)
The greatest years of Gale Sayers football career were spent at Wrigley Field. He won the Rookie of the Year, scored six touchdowns in one game, and electrified the fans with his incredible open field moves. Sayers was a four-time Pro Bowler, a two-time rushing champion, the comeback player of the year, and his number 40 has been retired by the Bears. He also, unfortunately, badly hurt his knee–cutting his Hall of Fame career short. The movie about his relationship with Bears teammate Brian Piccolo “Brian’s Song” has made more grown men cry than any other movie ever made. (Photo: Topps 1969 Football Card)