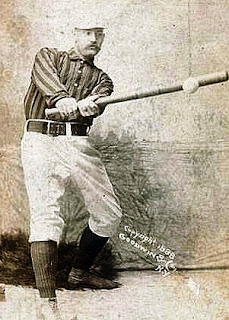 ~George Gore 1854–1933 (White Stockings 1879-1886)
Gore had one of the greatest nicknames of all-time; they called him Piano Legs. George was the centerfielder for the Cubs (then known as the White Stockings) during the team’s longest period of excellence. During Gore’s eight seasons, the team won the championship four times, including three years in a row (1880-1882). Piano Legs won a batting title (1880), hit over .300 six times, led the league in runs twice (1881-1882), and walks three times (’82, ’84, ’86), and still holds the club record most steals in a game (7). But George was also known as a big drinker and hell raiser off the field, and ran into constant conflict with team manager/captain Cap Anson. After the 1886 season, when some of the “drunks” on the team didn’t play up to their abilities in the World Series against St. Louis, Gore was shipped off to New York. (The others soon followed) In Anson’s book (which came out in 1900) he said that he saw Gore years later, and that his life had been ruined by “wine and women.”

~Ryan Dempster 1977– (Cubs 2004-2012)
Dempster was one of the most popular Cubs during his time in Chicago. He had a soft touch with the fans, and really seemed to embrace the idea of being a Cub. When the Cubs signed him he was coming off arm surgery. The longtime starting pitcher was used out of the bullpen while his arm recovered. For a few years, Dempster was a respectable closer. He saved 85 games between 2005–2007. The following year he was put back into the rotation and responded with the best season of his career. Dempster was 17-8, with an ERA under three, and was named to the All Star team. Unfortunately, he also started Game 1 of the NLDS playoffs, and the nerves seemed to get to him. Dempster walked the bases loaded and gave up a grand slam to Dodgers first baseman James Loney, and the Cubs never recovered. In 2012 Dempster was traded to the Rangers for promising prospects Christian Villanueva and Kyle Hendricks. In 2013 he won his first World Series as a member of the Boston Red Sox. He is now officially retired as a player and working for the Cubs. Only Kerry Wood has a better strikeouts-to-nine-innings rate in Cubs history.

~Joe Kmak 1963– (Cubs 1985)
Joe was a high school teammate of Barry Bonds, and eventually made it to the big leagues as a backup catcher. He had 53 at bats for the 1995 Cubs and hit .245. After his baseball career he went into teaching. He teaches high school calculus and trigonometry.

~Chris Cannizzaro 1938–2016 (Cubs 1971)
Chris had been the starting catcher for the Padres before coming to the Cubs. Chicago acquired him because catcher Randy Hundley had gone down with an injury. Cannizzarro got extensive playing time during that 1971 season and caught Cy Young winner Fergie Jenkins, but his hitting was atrocious. In nearly 200 at bats, he hit a mere .213. The Cubs let him go after the season and he finished his career as the backup catcher in Los Angeles.

~Ralph Michaels 1902–1988 (Cubs 1924-1926)
Michaels was a backup infielder (third & short) who played sparingly for the Cubs in the mid-20s. His most extensive playing time came in 1925, the first season the Cubs ever finished in last place. Ralph played twenty-two games for that dysfunctional outfit. He later played in the minor leagues until 1937. Ralph died just three days before the first night game at Wrigley.

~Frank Morrissey 1876–1968 (Cubs 1902)
Morrissey was nicknamed “The Deacon” and pitched for the Cubs the last few weeks of the 1902 season. His won-loss record was nothing special (he was 1-3), but Frank did set a record in his short time in Chicago. He is the shortest player to ever pitch in the big leagues. Frank stood 5’4″ tall.

~John Hollison 1870–1969 (Colts 1892)
His nickname was Swede. He pitched in only game for the Cubs (then known as the Colts) on August 13, 1892; a 6-2 loss to the first place Cleveland Spiders. He relieved HOFer Clark Griffith, pitching four innings, and giving up one run—a home run. When he died on August 19, 1969 (the day of Ken Holtzman’s no-hitter), he was 99 years old. At that time, the oldest living big league player. 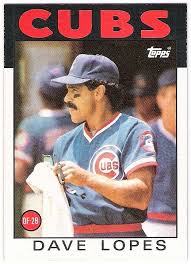 ~Davey Lopes 1945– (Cubs 1984-1986)
He was thought to be on the descent of his career when the Cubs acquired Davey late in 1984 to provide bench help during the pennant run, but the following season Lopes proved he still had quite a bit left in the tank. At the age of 40, he switched positions and learned to play outfield. When Cubs regulars like Bobby Dernier were hurt, Lopes filled in. He took advantage of this second chance and stole 46 bases during the 1985 season. Davey was traded the following year for Frank DiPino, and helped the Astros make the post season too. He retired after the 1987 season with more than 550 career stolen bases. He has been coaching in the big leagues ever since. (Photo: Topps 1986 Baseball Card)