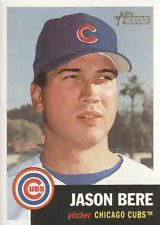 ~Jason Bere 1971– (Cubs 2001-2002)
Bere came up as a rookie with the White Sox and made an immediate impact, winning 12 games and pitching in the ALCS in 1993. He was runner-up for Rookie of the Year. The following year was even better, as Bere became an All-Star. Unfortunately for the fireballer, he developed arm problems after that and struggled mightily. His one-year resurgence came in his first year with the Cubs. He won 11 games and looked like he might be back. He wasn’t. His last year in Chicago was so bad, it was one for the ages. He went 1-10 with an ERA of 5.67.

~Eddie Haas 1935– (Cubs 1957)
Eddie Haas went 5 for 26 as a September backup outfielder for the 1957 Cubs. He knocked in 4 runs. He got two more brief shots with the Milwaukee Braves before he went into coaching. In 1985 Haas was given a shot to manage the Atlanta Braves. The Braves were 21 games under .500 when he was fired in the midst of his first and last season as a big league manager. His cousins Phil & Gene Roof were both big leaguers too.

~Chuck Hartenstein 1942– (Cubs 1966-1968)
His real name was Charles Oscar Hartenstein, but he got the nickname Twiggy because he was so thin. At 5’11, 165 pounds, he looked like he was barely capable of pitching, let alone intimidating the opponent. Twiggy pitched for the Cubs from 1966 to 1968. He did fairly well in 1967, winning nine games and saving ten. After a less productive 1968, the Cubs traded him to the Pirates for Manny Jimenez, an outfielder who only batted six more times in his major league career. Twiggy pitched two more seasons in the National League, then re-emerged in 1977 for one final season with the expansion Toronto Blue Jays.

~Ben Zobrist 1981– (Cubs 2016-2019)
The Cubs signed the two-time All-Star veteran fresh off his World Series win with the Kansas City Royals. His acquisition in 2016 was the reason the Cubs traded Starlin Castro to the Yankees. Certainly the Cubs would agree they got their money’s worth during the run of Zobrist’s four year contract. In his first season in Chicago, Zobrist did not disappoint. He was named the All-Star game starter (at 2nd base), hit 18 homers, and drove in 76 runs, while playing all over the field. By the time the playoffs began, Javy Baez had claimed the full-time second base job and Zobrist was in left field. He saved his greatest moments for the biggest stage, winning the World Series MVP award after hitting .357 and delivering big hits in crucial moments, including a crucial RBI late in Game 7. Zobrist was injured most of 2017, but played through those nagging injuries. It affected him at the plate (particularly from the right side). He hit 12 homers and drove in 50, but batted only .232. His postseason magic didn’t return either. Zobrist was hitless in the NLCS. In 2018, Zobrist bounced back. He flirted with the batting title most of the season, finishing at .305. His power numbers were down a bit (only 9 homers), but he was probably the club’s most consistent player. The Cubs thought they had finally found their leadoff man, and that’s where he began the 2019 season, his last as a Cub. To say it was a star-crossed season is to understate the case. Early in the year Zobrist asked for a leave of absence to deal with a marital problem. He didn’t return to the club until September. In his absence the Cubs tried countless leadoff men and second basemen, none of whom could fill his shoes. But the thing they missed most about Zo was his veteran leadership in the clubhouse, and the hardworking example he set on the field. His mysterious year-long absence will remain the unspoken asterisk to a disappointing 2019 season.