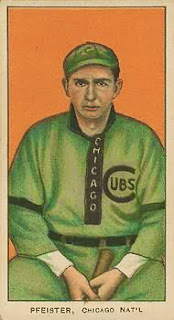 ~Jack Pfiester 1878–1953 (Cubs 1906-1911)
Jack was an important member of the starting rotation during the Cubs dynasty. The team went to the World Series four of his six seasons. He won 20 games for the 1906 team that won a record-setting 116 games before losing the World Series to the White Sox. He lost two games in that series. The following year, Jack led the league with an astounding 1.15 ERA, and won Game 2 of the World Series. The Cubs won it all that year. Pfiester started the 1908 season by injuring his thumb when he couldn’t get it unstuck from a bowling ball, and had several other injuries during the season. He only managed to win 12 games that season, but a few of those wins came in crucial games against the arch rival New York Giants. That’s why Pfiester was known as “Jack the Giant Killer.” Success began to elude him at the end of that season, however. He had to be removed after 2/3 of an inning in the one-game playoff game against the Giants, and was the only Cubs pitcher to lose a World Series game in 1908. He also appeared in the 1910 World Series for the Cubs, but by then he was being used primarily in relief. His 1.86 career ERA is the second best in Cubs history, behind only his teammate Three Finger Brown. (Photo: 1909 Tobacco Card)

~George Flynn 1871–1901 (Colts 1896)
Dibby, as he was known, got his only taste of the big leagues for the 1896 Cubs (then known as the Colts). The Chicago-born outfielder stole twelve bases and hit .255 in just over a hundred at-bats. Five years after his baseball career ended, Flynn died at the age of 30.