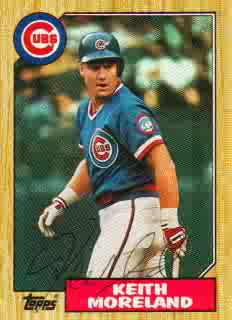 ~Keith Moreland 1954– (Cubs 1982-1987)
He was a tough former Texas football player with the given name of Bobby Keith Moreland, but to his Cubs teammates, he was simply known as Zonk. One of the many former Phillies on the Dallas Green-led Cubs of the mid-80s, Moreland was the Cubs’ leading batter (.302) in 1983 and had his best season in 1985 (.307, 106 RBI). Moreland started as a catcher, but was a liability on defense, so they tried him all over the field. He eventually became a respectable right fielder, but not before some embarrassing growing pains. Steve Goodman famously references his defensive shortcomings in his song “A Dying Cubs Fan Last Request.” The lyrics contain the line: “Keith Moreland drops a routine fly ball.” The Cubs moved Zonk to third base in 1987 to replace Ron Cey, and he struggled defensively again. On the other hand, he hit a career-high 27 homers that season. The Cubs traded him to San Diego for Goose Gossage in 1988. After his playing career he spent a few seasons in the Cubs radio broadcast booth with Pat Hughes. (Topps 1987 Baseball Card)

~Jose Ascanio 1985– (Cubs 2008-2009)
Jose came to the Cubs in the trade that sent Will Ohman to the Braves. He was a power arm and the Cubs thought he would take over a late inning role in the bullpen. He wasn’t that guy. Ascanio appeared in twenty games over two seasons and was traded to the Pirates for Tom Gorzelanny and John Grabow in 2009. He didn’t do much for the Pirates either.

~Gale Staley 1899–1989 (Cubs 1925)
The second greatest Gale to ever play in Wrigley (the other one played football) played at the tail end of the ’25 season (Sept/Oct). That was the first year the Cubs ever finished in last place. In his first at bat, Staley lined a single and drove in a run in the bottom of the 9th inning. A week later he got his first start at second base and batted seventh in the lineup, between Charlie Grimm and Gabby Hartnett. He went 2 for 3, and started a few double plays. He played there the rest of the season, including Pete Alexander’s last start. By his fourth game he was batting second in the lineup behind Sparky Adams (who had shifted over to SS to replace Rabbit Maranville). Staley got at least one hit in every game he played, but he spent the rest of his career in the minor leagues.

~Bill Piercy 1896–1951 (Cubs 1926)
His nickname was Wild Bill. He was 30 years old by the time he got to the Cubs, and had been in the minors for a whole season. Wild Bill went 6-5 with a 4.48 ERA in 90 innings during the 1926 season. Among his teammates that year: Future Hall of Famers Gabby Hartnett, Hack Wilson, and Grover Cleveland Alexander. He also played with Home Run Baker and Babe Ruth during his two brief stints with the Yankees.

~Larry Cheney 1886–1969 (Cubs 1911-1915)
Cheney was a great pitcher for the Cubs, winning twenty games or more three seasons in a row. In his first big league start at the end of 1911 he got hit with a line drive that broke his fingers. When the fingers recovered he couldn’t grip the ball the same way anymore. The way he had to grip the ball after the injury involved digging his fingernails into the ball. Cheney accidentally discovered the knuckle ball. As a rookie in 1912 he led the league with 26 wins. The following season the Cubs began using him as a closer too. He saved 11 games in 1913, and led the league in appearances. He logged over 300 innings three seasons in a row. If Cheney had a weakness as a pitcher, it was that he didn’t field his position well. He led the league’s pitchers in errors four times. He also led the league in wild pitches six times. The year after he left the Cubs, Cheney got his only shot at the World Series. He and his Brooklyn teammates lost the 1916 series to Babe Ruth and the Boston Red Sox.