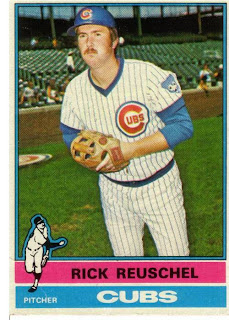 ~Rick Reuschel 1949– (Cubs 1972-1981, 1983-1984)
His real name was Rick Reuschel, but to his teammates he was Big Daddy. The nickname obviously had nothing to do with the Adam Sandler movie (because it didn’t come out until many years after he retired), and it had nothing to do with the Burl Ives character in the movie “Cat on a Hot Tin Roof” because that came out fourteen years before his Cubs debut in 1972. He was dubbed Big Daddy by teammate Mike Krukow, because at 6’3″, 235 pounds, he didn’t much look like someone who could pass for a professional athlete, let alone be one. For the decade of the 1970s, Rick Reuschel was the best pitcher on the Cubs. He got 135 of his 214 career wins for Chicago, which is the second highest win total of any Cubs pitcher since World War II (behind only Fergie Jenkins). Big Daddy won 10 or more games for nine years in a row (1972-1980), and on August 21, 1975, he and his brother Paul became the first brothers to combine on a major league shutout. After an injury plagued stint with the Yankees, the Cubs re-signed him, and he pitched for them again in ’83 and ’84. Unfortunately, they let him go because they thought he was done. He wasn’t. He won 70 more games for the Pirates and Giants over the next seven seasons. Only one pitcher in Cubs history has started more games for the Cubs than Reuschel; Hall of Famer Fergie Jenkins.

~Rube Walker 1926–1992 (Cubs 1948-1951)
May 23, 1948 was supposed to be Rube Walker’s big break. The young catcher had played in a few games as a late inning defensive replacement, including the day Jackie Robinson stole home against the Cubs at Wrigley (right in front of Rube), but he had never started a game for the Cubs before. The Cubs were in the midst of a miserable season, and they were playing a double header against the Boston Braves (in Boston). After losing the first game 8-5, Cubs manager Charlie Grimm penciled in Walker to start the second game; his first ever start. In the top of the first, Walker even got a chance to bat. He dug in, waited for the pitch from Braves pitcher Vern Bickford, and boom! The pitch hit him right in the noggin. He went down and remained down. Remember, this was in the era before batting helmets. Walker had to be carried off the field on a stretcher and was hospitalized with a concussion…before he even got to catch one pitch as a starting catcher. Walker did manage to return to the majors that same season. He went on to have an eleven year major league career as a backup catcher, and even got a chance to play in the World Series for the 1956 Brooklyn Dodgers. After he retired, Rube became a pitching coach for the New York Mets. You might remember that young Mets staff he coached, beginning in 1968. Not sure if they ever amounted to anything.

~Mitch Webster 1959– (Cubs 1988-1989)
Webster was a member of the Expos in 1987 when Bill Murray filled in for Harry Caray on the Cubs broadcast (after Harry’s stroke). At one point during the game, Murray leaned out and taunted Mitch. The next season Mitch was on the Cubs, acquired in a trade for Dave Martinez. Webster played all three outfield positions, and was a contributor to the division winning Boys of Zimmer in 1989. He spent 13 years in the big leagues.

~Bob Patterson 1959– (Cubs 1996-1998)
Patterson was a journeyman reliever who pitched for the Pirates, Rangers and Angels before coming to the Cubs. He was 5-10 for the Cubs in his three seasons, and was released during July of his pretty dreadful 1998, when he had a seven-plus ERA. The Cubs won the wildcard that season.

~Howard Fitzgerald 1902–1959 (Cubs 1922, 1924)
Fitzgerald is one of the few people nicknamed “Lefty” who wasn’t a pitcher. He was an outfielder. Unfortunately for Howard, he didn’t have a lot of power for a corner outfielder. In 150 career plate appearances, he hit exactly zero home runs. Lefty spent most of his baseball career in the minor leagues. He hung up his spikes after the 1933 season. Fitzgerald died in an automobile accident in Texas at the age of 56.

One Response to “Today’s Cubs Birthdays (May 16)”