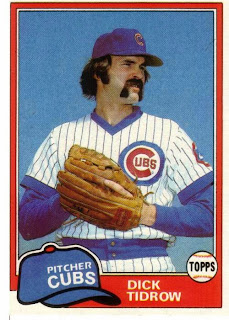 ~Dick Tidrow 1947– (Cubs 1979-1982)
His teammates called him “Dirt”. His odd nickname reflected his basic, simple approach to the game. His real name was Richard William Tidrow, and he was the setup man for the Cubs (for Bruce Sutter) in the late 70s and early 80s. The Cubs got him from the Yankees for Ray Burris, one of the rare trades they never regretted. Tidrow had two great years (’79 and ’80), one terrible year (’81), and one average year (’82) for the Cubs, before he went to the White Sox in the Steve Trout trade, and pitched in the playoffs for the Sox that year. That turned out to be another good trade for the Cubs. Trout started for the Cubs the next five years (and won Game 2 of the ’84 playoffs), and Tidrow was out of baseball after the ’84 season. The Cubs should have signed him after his playing career ended. He went into scouting, eventually becoming the Scouting Director for the San Francisco Giants. Among the pitchers he nurtured through their farm system: Tim Lincecum and Matt Cain. (Photo: Topps 1981 Baseball Card)

~Wimpy Quinn 1918–1954 (Cubs 1941)
His real name was Wellington Hunt Quinn, and his teammates called him Wimpy. Wimpy’s Cubs career was very short–he only pitched in three games–and he wore a different uniform number each time. It’s safe to say they didn’t call him Wimpy because of his size. Wimpy Quinn was 6’2”, 190 pounds, a big man by 1941 standards. He more than likely acquired the nickname because his given name (Wellington) was the same as J. Wellington Wimpy, the comic book character from Popeye. In 1942 the Cubs demoted their Wimpy and his 7.20 ERA all the way to their B-league team in Madison to learn how to pitch (he had been a first baseman–they were trying to convert him). Wimpy had a pretty good minor league career as a hitter (he hit .302 and hit 121 homers), but he never developed into a pitcher. Wimpy Quinn died of cancer at the incredibly young age of 36.

~Dave LaRoche 1947– (Cubs 1973-1974)
He was supposed to be the closer for the Cubs when they acquired him from the Twins before the 1973 season (for Bill Hands and Joe Decker), but LaRoche couldn’t do the job. His ERAs were 5.80 and 4.79 in his two seasons with the Cubs. Of course he managed to rediscover his touch after leaving Chicago. In the next five years he saved 90 games, pitched in the All-Star game for Cleveland in 1976 and 1977, and the playoffs in 1979 for the Angels. His sons Adam and Andy both played major league ball.

~Efren Navarro 1986– (Cubs 2018)
Navarro came up ever so briefly in the summer of 2018 and got into two games as a first baseman when Rizzo was hurt. The Cubs released him in June.