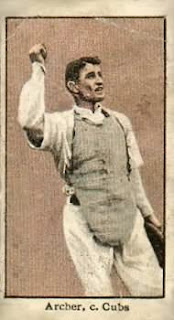 ~Jimmy Archer 1883–1958 (Cubs 1909-1917)
He was the regular Cubs catcher from 1911 to 1917, but Jimmy Archer was much more than that. He was an early version of television’s Steve Austin; the bionic Cub. During the winter of 1902, at the age of 19, Archer was working as a barrel maker in Toronto when he fell into a vat of boiling oak sap. He scalded his right arm and leg so badly that he was hospitalized for three months. Jimmy was in so much pain during his hospitalization that he begged for his arm to be amputated. But the injury had an upside that he never could have expected. As a result of the accident, the tendon in his right arm shrunk and made his right arm shorter than his left. It also made it unusually strong. Suddenly Jimmy was able to throw the baseball with incredible velocity. The catcher became famous for his arm, and he always claimed it was due to the accident. Jimmy got his MLB start catching for the Tigers, and got some action in the World Series against the Cubs that year. He even threw out the Cubs best base stealer (Jimmy Slagle). The Cubs acquired him shortly thereafter, and Archer eventually took over the starting catching job from Johnny Kling. Jimmy was one of the best players on the Cubs during his decade in a Chicago uniform, being named to the “All American” team three years in a row (1912-1914). His throwing arm was the envy of the league. The Irish born Archer settled in Chicago after his playing days were over and made headlines one more time before his death. On August 7, 1931, he was in the Chicago Stockyards when he saw two men dying in the cab of a truck. They were overcome with carbon monoxide gas. Archer pulled them out in time to save their lives, and then administered first aid to revive them. The National Safety Council awarded him a medal for his heroism.

~Bob Smith 1927–2003 (Cubs 1959)
This Bob Smith is differentiated from the others by his great nickname. They called him Riverboat because he grew up in Missouri, along the Mississippi River. He was acquired by the Cubs from the Boston Red Sox in exchange for future manager Chuck Tanner during spring training of 1959. With the Cubs, he stunk up the joint. Although in all fairness to Riverboat, he didn’t get much of a chance. He pitched in exactly one game, faced nine batters, and gave up 5 hits, 2 walks, 6 ER, and a wild pitch in 2/3 of an inning. The Cubs traded him shortly after the game to Cleveland for former Cubs favorite Randy Jackson. Both players were toast. Riverboat finished out the season with Cleveland with a 5.22 ERA in 12 appearances. Jackson had the last 74 at bats of his career, and hit one home run. Neither player played a single MLB game in the 1960s.

~Terry Hughes 1949– (Cubs 1970)
Hughes is a great example of the Cubs drafting prowess in the first twenty years of the amateur draft. The Cubs took Terry with the second overall pick in 1967. They could have had future All-Stars Jon Matlack, John Mayberry or Ted Simmons instead. It’s not like those guys were surprises. All of them were chosen in the top ten picks, and all of them eventually played in the World Series. Hughes played in two games with the Cubs in September of 1970. The third baseman went 1 for 3, including 0 for 2 in his debut, a 17-2 shellacking of the Phillies at Wrigley Field. He later got a cup of coffee with Red Sox as a late inning defensive replacement for Rico Petrocelli at third base.

~Lou Stringer 1917–2008 (Cubs 1941-1942, 1946)
Lou became the starting second baseman after the Cubs made the ill-advised Billy Herman trade in 1941, and started there in 1942 too. He was known more for his glove (a decent double play man) than his bat, although he did have two pretty good offensive seasons with the Cubs before being drafted into the military. He missed three seasons of his big league career serving in the Army Air Corp. When he came back from the war he had another cup of coffee with the Cubs before they traded him to the Boston Red Sox. He finished his career in Boston in 1950.

~Nico Hoerner 1997– (Cubs 2019-present)
The first round draft choice tore up spring training in 2019. If the team didn’t already have Javier Baez playing shortstop, the Cubs may have brought him right up to the big leagues. Instead they let him play the season at Double-A Tennessee. Hoerner had a respectable season, hitting .284, playing steady shortstop (and second base) and making good contact. He was sent home to enjoy his off-season, and was making plans for next year, when the phone rang. Javier Baez had broken his thumb, and the Cubs needed a shortstop. Hoerner played the last month of the season with the Cubs and had some great moments. He also experienced the late season collapse, but no-one could blame Nico for that. He settled down a shaky infield defense, drove in 17 runs, and batted .282.

~Willson Contreras 1992– (Cubs 2016-present)
Willson began the championship season as the Cubs top prospect, but he wasn’t brought up to the big leagues until one of the other catchers was injured. He started off with a bang, hitting a homer on the first pitch he ever saw in the bigs. Contreras didn’t slow down from there. His energy was contagious, and before the season was over he was the team’s starting catcher. The rookie catcher hit over .600 in the NLDS, slugged a homer in the NLCS, and knocked in a run in the World Series-clinching Game 7. In 2017 Contreras was the starting catcher all season. Most of the time he batted in the clean-up spot. He hit 21 homers and knocked in 74 runs despite missing an entire month with an injury. He was voted the starting catcher in the 2018 All-Star Game, but the big second half the fans expected never materialized. Willson ended the year with only 10 homers and a .249 batting average. He was on the verge of having a career season in 2019. He started in the All-Star game for the second year in a row, hit 24 homers, and drove in 64 runs, but once again was bitten by the injury bug. Contreras missed over 50 games, and the Cubs suffered mightily in his absence.