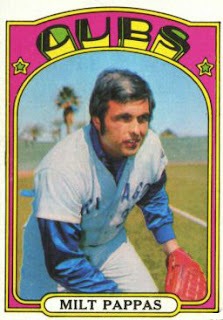 ~Milt Pappas 1939–2016 (Cubs 1970-1973)
Milt had some of his best seasons as a big league pitcher with the Cubs at the tail end of his career. In 1971 he became one of only ten pitchers in big league history to strike out the side on nine pitches. In 1972 he came just one out away from pitching a perfect game (and never forgave the umpire for calling ball four on the 27th batter). Milt never seemed satisfied with just pitching a no-hitter, which is what he pitched that day. Though he was a two-time All-Star and won more than 200 games in his career, Pappas was often embroiled in controversy. While he was with the Orioles, he admitted to grooving one to Roger Maris during his quest for 61 homers. He was traded to the Reds for Frank Robinson–who went on to win the triple crown for the Orioles. Milt got into a fight with Reds teammate Joe Nuxhall and was traded to the Braves. His Cubs career wasn’t without controversy either. He was in the middle of the fight that may have led to Leo Durocher losing his team once and for all. The date was August 23, 1971. Leo Durocher tells the tale himself in his book Nice Guys Finish Last. Essentially, here is the story. The Cubs were in the clubhouse before a game against the Cincinnati Reds. They were 11 games over .500 and only 4 1/2 games behind the first place Pittsburgh Pirates, but Leo was still upset with Milt. The previous game he had allowed the winning run in a 4-3 loss when Doug Radar hit an 0-2 pitch. He called a club meeting and ripped Pappas for his stupidity. After his little speech he opened the floor for comments. Joe Pepitone, Ken Holtzman and Milt Pappas began ripping Durocher. That’s when Leo lost it. He tore into every player on the team in a legendary expletive filled tirade. Among those he ripped was team captain Ron Santo. Santo had to be physically restrained by his teammates. The Cubs somehow went out and won the game, but afterwards they spiraled into a deep losing streak. They lost 16 of their next 21 games. Durocher had lost the club forever. (Photo: Topps 1972 Baseball Card)

~Trenidad Hubbard 1964– (Cubs 2003)
He was born in Chicago, went to Southern Illinois University, and got to fulfill a childhood dream by playing in the big leagues in his home town. His last 16 big league at bats were for the Cubs. He went 4 for 16 with 2 RBI in July of 2003 before being returned to the minors. In his career he also played for the Giants, Rockies, Indians, Dodgers, Braves, Orioles, Royals, and Padres.

~Jerry Martin 1949-– (Cubs 1979-1981)
The Cubs acquired Martin in a big trade just before the 1979 season along with catcher Barry Foote and second baseman Ted Sizemore for Manny Trillo, Dave Rader, and Greg Gross. He had a couple of good years with the Cubs, hitting 19 and 23 homers in his first two years with the team. After he slumped in 1981, the Cubs traded him to the Giants. Martin will unfortunately always be known as one of the first active big league players to serve time in prison. When he was with the Royals in 1983, he and teammates Willie Wilson (a future Cub), Willie Aikens, and Vida Blue were sentenced to prison on cocaine charges. He later returned to the big leagues with the Mets, but wasn’t nearly the same player.

~Mel Wright 1928–1983 (Cubs 1960-1961)
Mel didn’t have a lot of success as a big league pitcher. He was already in his 30s when he came to the Cubs and was knocked around pretty well (7.68 ERA). However, after his pitching career ended, he went into coaching. He was part of the ridiculous College of Coaches experiment, served as a pitching coach for the Cubs and the Pirates, and was on the coaching staffs of the Yankees, Astros and Expos.

~Gene Hermanski 1920–2010 (Cubs 1951-1953)
During his time with the Dodgers, Gene was one of the first players to accept Jackie Robinson as a teammate. He once joked that all of the Dodgers should wear the number 42 so that snipers didn’t know which one was Jackie. Hermanski came to the Cubs from the Dodgers in one of the most lopsided trades in team history along with light-hitting shortstop Eddie Miksis, Bruce Edwards and Joe Hatten in exchange for the most popular player on the Cubs (Andy Pafko), one of their best starting pitchers (Johnny Schmitz), catcher Rube Walker, and Wayne Terwillinger. The trade was so lopsided fans thought that Cubs GM Wid Matthews, a former Branch Rickey protégé, was still on Rickey’s payroll. The Dodgers won the pennant in 1952 with those players while the Cubs finished 19 1/2 games behind them. Hermanski was mainly the fourth outfielder in Chicago during his time with the Cubs.

~Dewey Adkins 1918–1998 (Cubs 1949)
Dewey didn’t get a lot of time in the big leagues (he pitched briefly during the war for the Senators), but his most extensive action came as a member of the Cubs in 1949. He was a right handed pitcher and pitched mostly in relief. In 30 games (five starts) he clocked in with a 5.68 ERA. That wasn’t quite good enough to extend his big league career into the 1950s. His Cubs career highlight was the day he hit his only big league home run.