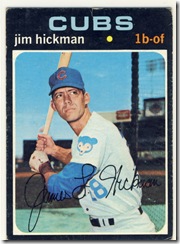 ~Jim Hickman 1937–2016 (Cubs 1969-1973)
After eight forgettable seasons with three different teams, Jim Hickman was magically transformed from a perennial struggler to a powerful slugger. In 1970 at the age of 33, “Gentleman Jim” somehow batted .315, with 32 home runs, 115 runs batted in, and 102 runs scored for the Chicago Cubs. Not bad for a player whose previous career bests were a .257 average, 21 homers, 57 RBI and 54 runs scored. He also drove in a hard-charging Pete Rose with a 12th inning single in that season’s All-Star Game (probably the most famous moment in All-Star Game history). When asked to explain his surprising turnabout, Hickman replied, “I really don’t know. If I knew, I’d tell you.” His manager Leo Durocher loved him because he was a gentleman (hence the nickname) and because he would defend the boss against what Durocher considered the “trouble-making” faction of Milt Pappas and Joe Pepitone. Hickman passed away on June 25, 2016 during the Cubs World Championship year.
(Photo: 1971 Topps Baseball Card)

~Tim Hosley 1947–2014 (Cubs 1975-1976)
Hosley was a backup catcher in his nine-year big league career, and his best season in baseball was with the 1975 Cubs. (His Oakland A’s teams in 1973 and 1974 won the World Series, but Tim wasn’t on the post-season roster). With the Cubs he backed up Steve Swisher and George Mitterwald, got over a hundred at-bats, and hit six homers. The Cubs let him go early in the 1976 season, and he returned to the Oakland As.

~Merritt Ranew 1938–2011 (Cubs 1963-1964)
In 1963 he had the best year in his career with the Cubs. He got over 150 at bats backing up catcher Dick Bertell and responded by hitting an astounding .338, almost a hundred points above his lifetime average. Merritt hit over .400 as a pinch hitter that year. He returned to earth the following year, and never hit higher than .247 again. Ranew was traded to the Braves in 1964 for Len Gabrielson. His last sniff of the big leagues came with the expansion Seattle Pilots in 1969.

~Russ Bauers 1914–1995 (Cubs 1946)
Bauers was a big right handed pitcher who had his best seasons with Pittsburgh before the war. He pitched mostly in relief with the Cubs in 1946, after a five year absence from the big leagues. He won two games and saved another. The Cubs sent him back to the minors the following year, and he re-emerged for one final big league season with the St. Louis Browns in 1950.

~Bill Davidson 1887–1954 (Cubs 1909)
He was a 22-year-old centerfielder when he came up with the Cubs at the very end of the 1909 season. Davidson played in only two games, but he opened some eyes because of his speed. Brooklyn traded for him the following season (along with Happy Smith and Tony Smith), and let him play every day in 1910. Davidson responded by stealing 27 bases. He would have had more if he didn’t have such a difficult time getting on base. By 1911 his big league career was over, doomed by a lifetime batting average of .235.

~Charlie Ferguson 1875–1931 (Orphans 1901)
Charlie pitched exactly two innings for the Cubs (then known as the Orphans) on September 20, 1901, during a double-header against the Boston Braves. He walked two and gave up a hit, but didn’t allow any runs to score, meaning his lifetime ERA was a perfect 0. After his one shot of big league glory, he went back to the minors the following season and pitched there until 1909. Even though he only spent one day as a big leaguer, he could always say that he played alongside two Hall of Famers. Rube Waddell and Frank Chance were both on his team. He later became an umpire. Ferguson drowned on a fishing trip in Whitefish Bay.

~Freddie Maguire 1899–1961 (Cubs 1928)
Freddie was the starting second baseman for the Cubs in 1928, but he couldn’t have been too disappointed to be replaced the following season. The man who took his place was none other than Hall of Famer Rogers Hornsby. In fact, Freddie was part of the five man trade package needed to get Hornsby from the Braves. Freddie started at second base the next three seasons for the Boston Braves.

~Pierce Johnson 1991– (Cubs 2017)
The former first round draft choice finally made the big leagues for the Cubs in the summer of 2017, but only pitched in one game. The Cubs made three errors in his only inning pitched. He was waived in September. He was picked in the same first round as Albert Almora Jr. and Addison Russell.