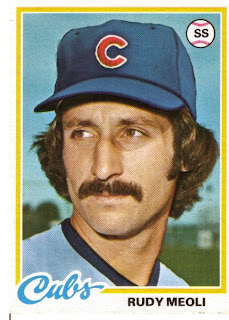 ~Rudy Meoli 1951– (Cubs 1978)
Because Joe Pepitone had retired from baseball a few seasons earlier, the Cubs were in desperate need of a player who looked just like him. They weren’t disappointed when Rudy Meoli showed up in camp. He had the same wild look as Pep, but he had one other quality that Pepitone only dreamed of having…a truly fantastic mustache. On the other hand, Pepitone could hit. Meoli could not. The backup infieder for the Cubs in 1978 hit a whopping .103 for the season. His bat and glove weren’t a big help, but his mustache fit right in with the other legendary mustaches on a Cubs team that got within sniffing distance of .500 (79-83). (Topps 1978 Baseball Card)

~Albert Lasker 1880–1952 (Cubs owner 1910s/1920s)
Lasker was an advertising pioneer, a minority and majority owner of the Cubs (the one who convinced Weeghman to buy the Cubs, and William Wrigley to take it over a few years later), and he also played an important role in the presidency of Warren G. Harding. In 1920, Harding was nominated by Republican party leaders in a smoke-filled Chicago hotel room; Suite 4046 on the 13th floor of the Blackstone Hotel. Albert Lasker was one of those Republican operatives who helped Harding secure the nomination in that smoke-filled room. Unfortunately he also introduced Harding to another Cubs minority owner, Harry Sinclair. Sinclair was later a key figure in the Teapot Dome Scandal that forever tarnished Harding’s legacy. Lasker was considered an advertising genius, and the firm he founded was sold to three gentlemen who renamed it after themselves: Foote, Cone, and Belding.

~Paul Carter 1894–1984 (Cubs 1916-1920)
Carter pitched for the Cubs in their first five seasons at Wrigley Field. His ERA was always solid. In 1916 & 1917 he was a spot starter, but in his final three seasons, including the pennant winning year of 1918, he pitched exclusively out of the bullpen. In five years he won 18 games and saved 7, with an ERA of 3.32. His nickname was Nick. He passed away three weeks before Steve Garvey stabbed Cubs Nation in the heart.