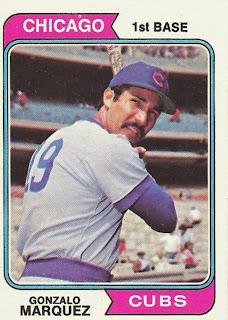 ~Gonzalo Marquez 1946–1984 (Cubs 1973-1974)
Gonzalo was a star in his native Venezuela, leading his team to the Caribbean World Series in 1970. The big first baseman was never more than a fringe player in the big leagues, but he did show flashes of power with both Oakland and the Cubs. After his time in the majors was over, he went back to Venezuela and played there until his death. He was on his way home from a winter league game when he was killed in an automobile accident. Marquez was only 38 years old. (Photo: Topps 1974 Baseball Card)

~Big Jeff Pfeffer 1882–1954 (Cubs 1905, 1910)
Big Jeff was a college boy (from the University of Illinois) during a time very few MLB players went to college. The downstate native got his crack at the big leagues after he graduated, the year before the Cubs set the record for most wins in a season. The 1905 version of the team was just a few players short…they hadn’t yet acquired Orval Overall, Harry Steinfeldt, or Jimmy Sheckard. Pfeffer was essentially an extra starting pitcher, and occasional reliever. Unfortunately for Big Jeff, he left the best team in baseball to pitch for the worst (the Boston Braves). He returned to Chicago for their pennant winning 1910 season, and pitched almost exclusively out of the bullpen that year. If he had only been a bigger star, surely Jeff Pfeffer would have inspired a tongue twister. Here’s mine: Jeff Pfeffer’s Heifer Heather Left a Leather Sweater.

~John Herrnstein 1938–2017 (Cubs 1966)
After starring in two sports in college (University of Michigan), Herrnstein was drafted by the Phillies. The Cubs got him in the deal that also sent Fergie Jenkins to Chicago. Herrnstein was a power hitter in the minor leagues, but in his one extended big league opportunity (with the Phillies in 1964), he didn’t really produce. The Cubs were one of the three teams John played for in 1966. In seventeen at bats with Chicago he managed three hits. All three were singles.