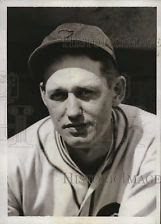 ~Johnny Gill 1905–1984 (Cubs 1935-1936)
His teammates called him “Patcheye.” Johnny didn’t wear a patch over his eye, although he must have at least once, because the nickname “Patcheye” stuck with him throughout his career. He was a minor-league lifer, playing more than 23 seasons. He was one of those players that would be considered a 4A player today; too good for the minors (lifetime average over .320, with nearly 300 homers), but just not quite good enough for the big leagues. Gill got a few cups of coffee in the show before coming to the Cubs in their pennant winning season of 1935 (in 1927 & 1928 with Cleveland, and 1931 & 1934 with the Senators), but he never had more than 69 at bats in a season. He got a whopping three at bats in 1935 for the Cubs. Patcheye stayed with the team as a backup outfielder in 1936 (backing up Augie Galan, Frank Demaree, Ethan Allen) and got the longest look of his big league career that season. He made the most of it, hitting 7 homers in only 174 at bats. Unfortunately for Gill, that turned out to be the swan song of his major league career. Johnny Gill didn’t even make it back to the bigs during the war era, though he was playing in the minors that whole time (in Portland). He retired as a player (from the minors) after the 1947 season, and then managed the minor league team in his hometown of Nashville Tennessee.

~Walter Stephenson 1911–1993 (Cubs 1935-1936)
Stephenson was from a small North Carolina mountain town, and he only played in twenty two games for the Cubs in 1935 and 1936. Nicknamed Tarzan for his impressive physique (He was about 6’, 180 pounds), he didn’t get to play much because he was a backup catcher to Cubs ironman catcher Gabby Hartnett. Tarzan was a memorable character though, known for his toughness and temper. In 1935, he and Billy Jurges got into a fist-fight in the dugout at Forbes Field because Jurges made a crack about the south losing the Civil War (Jurges was from Brooklyn). Tarzan Stephenson later played ten more games for the Philadelphia Phillies before drifting off into the minors.

~Bill Collins 1882–1961 (Cubs 1911)
Bill was acquired in the trade that sent Johnny Kling to Boston in 1911. Collins didn’t get many opportunities with the Cubs. The outfielder was mainly a defensive replacement. He only batted three times wearing a Cubs uniform.

~Wes Covington 1932–2011 (Cubs 1966)
Covington roamed the same outfield as Hank Aaron in Milwaukee for several years, including a few years Wes posted some pretty strong numbers (over 20 homers twice). He was part of the Milwaukee Braves team that won the World Series in 1957, and hit .330 the following year. In the early to mid-60s he also had three good years for the Phillies. But by the time he arrived in Chicago, he was considered strictly a pinch hitter. He started the 1966 season with the Cubs, but after going 1 for 11, they gave up on him and released him. Covington resurfaced with the Dodgers, and his last big league at bat came in the 1966 World Series. There was no joy in Mudville. The mighty Wes struck out.

~Vic Harris 1950– (Cubs 1974-1975)
Harris can always say that he was traded for Hall of Famer Ferguson Jenkins. It’s true, he was the throw in to the trade that brought Bill Madlock to Chicago. The Cubs had high hopes for Harris and handed the second base job to him at the beginning of the 1974 season, but he just couldn’t hit, and was sent down to the minors. He hit .179 for the Cubs in 1975, and that was all she wrote for Vic. He was traded to the Cardinals for another infielder who couldn’t hit–Mick Kelleher.

~Dick Ruthven 1951– (Cubs 1983-1986)
Dick was a Dallas Green favorite. He was a member of the 1980 World Series team managed by Green, and shortly after Green took over the Cubs, Ruthven was one of the first players he acquired. Unfortunately, Dick never really clicked with the Cubs. In 1984 he began the season as the Opening Day starter, but the time the season ended, he was #5 (behind Sutcliffe, Trout, Eckersley, and Sanderson), and he didn’t pitch in that tragic NLCS against the Padres. Ruthven stayed with the Cubs another season and a half, but after posting similarly mediocre numbers, he was released in early 1986. It was the end of his baseball career.

~Drew Hall 1963– (Cubs 1986-1988)
For the most part, Dallas Green did a very good job drafting during his time at the helm of the Cubs, but in 1984 he spent the third overall pick on pitcher Drew Hall. (Mark McGwire was picked a few picks later). Hall had an electric arm but was never able to harness it. His time with the Cubs was memorable for how badly it went. He was hit hard, was wild in the strike zone, and after three seasons was shipped off to Texas along with two other projects that had slightly better careers (Rafael Palmeiro and Jamie Moyer). Hall pitched his last pitch in the big leagues at the age of 27.

~Jaime Navarro 1967– (Cubs 1995-1996)
When the Cubs signed Navarro as a free agent, it was considered a very bad move by many of the scribes in Chicago. Navarro proved them wrong by posting two outstanding seasons (14 and 15 wins) before signing with the White Sox. That’s where he imploded. Could it have worked out any better than that? Navarro’s dad Julio was also a big league pitcher. Jamie went on to become the bullpen coach for the Seattle Mariners.

~Junior Lake 1990– (Cubs 2013-2015)
Lake wasn’t considered one of the best prospects in the talented Cubs minor league system, but he forced his way up to the Cubs with his performance. He made a big splash in the big leagues in his first season, hitting .284. 2014 was a different story–as Lake struggled mightily—and struck out a lot. In July of 2015 the Cubs traded him to the Orioles for reliever Tommy Hunter.

~Lynn McGlothen 1950–1984 (Cubs 1978-1980)
Big Lynn was an All-Star with the Cardinals before coming to the Cubs. The Cubs got him from the Giants in exchange for third baseman Hector Cruz, and Lynn had a few good seasons in Chicago, winning 30 games for the Cubs. Unfortunately, he developed elbow problems, and was never the same after that. Lynn was only 32 years old when he was forced to retire. McGlothen’s story ends tragically. He passed away in a mobile home fire in 1984. He was only 34 years old. (Photo: 1980 Topps Baseball Card)