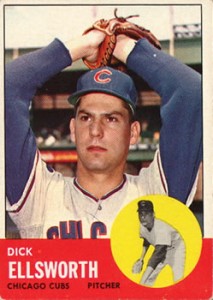 –Dick Ellsworth 1940 (Cubs 1958-1966)
Ellsworth experienced the highest highs and the lowest lows during his Cubs career. The lefthander won 20 games one year (one of only six lefties to lead the team in wins since World War II), and lost 22 games another year. He made the All Star team, but finished that season with a sub .500 record. He pitched for the Cubs during their darkest days (two 100-loss seasons), and was traded (for Ray Culp in 1967) right before they got good. But he also won more than a hundred games in a very solid thirteen year big league career. His career record may have been under .500, but Hall of Famer Willie McCovey once told the Sporting News: “Don’t let Dick’s won-and-lost record fool you. It’s misleading. He’s tough on any hitter.” (Photo: Topps Baseball Card)

~Paul Schramka 1928 (Cubs 1953)
Schramka was a speedy outfielder who played in the Cubs minor league system from 1949-1954 (including a military stint during the Korean War), but he did get a cup of coffee with the Cubs in April of 1953. He appeared in two big league games. He pinch ran for catcher Clyde McCullough one game, and replaced outfielder Gene Hermanski for one inning during another game. That was it. He was interviewed by the Baseball Biography project in 2007 about his time in baseball, and recalled it this way. “The Cubs had seven outfielders at the time. I was number seven. I knew my place.”

~Al Schroll 1932 (Cubs 1960)
His nickname was “Bull”, but he wasn’t the one that let a groundball through his legs in the 1984 NLCS. This “Bull” was a pitcher. The Cubs got the big Louisiana kid from the Red Sox for Bobby Thomson, but he didn’t exactly turn out to be the pitcher they had hoped. His Cubs career lasted 2 2/3 innings, and in those innings he posted an ERA of 10.13. Schroll got one more cup of coffee with Twins the following season (1961), and during that season he made history along with fellow Twins pitcher Jack Kralik. For more than forty years it was the last time that two pitchers on the same team had hit a homer in the same game. Schroll hit his off Al Fowler, who later became Billy Martin’s pitching coach with the World Champion Yankees. Bull Schroll passed away in Louisiana in 1999 at the age of 67.

~Gene Oliver 1935 (Cubs 1968-1969)
Gene was one of the veterans on that memorable 1969 Cubs team; a 34-year-old backup catcher. He didn’t get to play much because Randy Hundley didn’t like to take a day off, but Gene was an important presence in the dugout, and beloved by his teammates. He had a couple of very good seasons with the Milwaukee Braves in the mid-60s, and also caught for the Cardinals, Philies, and Red Sox. 1969 was his last season in baseball.

~Glenallen Hill 1965 (Cubs 1993-1994, 1998-2000)
The bulging biceps and nasty scowl on Hill’s face may have come from artificial sources (as the Mitchell Report intimated in 2007), but he will always be remembered for a home run he hit on May 11, 2000. That day Hill became the only player in history to hit a homer onto the rooftop of the building across the street. It was a momumental blast, estimated at well over 500 feet.

~Bill McClellan 1856–1929 (White Stockings 1878)
McClellan got to play for his hometown Cubs (then known as the White Stockings) in only their third season in the National League. He played second base and shortstop, and hit .224 in just over 200 plate appearances. It was his only season in Chicago. He retired to his hometown after stints with Providence, Philadelphia, Brooklyn and Cleveland, and is buried in Rosehill Cemetery in Chicago.

~Chico Marx 1887 (Cubs fan 1909-1920)
The Marx family moved from New York to Chicago in 1909. For much of that time they lived in a large house at 4512 South Grand Boulevard (now called Martin Luther King Boulevard). The house is still there. The Marx Brothers (Gummo, Groucho, Harpo, Chico, and Zeppo) were already a traveling Vaudeville Act in April of 1917 when America entered World War I. They had been touring in the south when War was declared. But the war forced them to take drastic measures: they purchased a farm in LaGrange, Illinois. Their mother had heard that farmers were going to be exempt from military service, and she wanted to do whatever was necessary to keep her boys out the fight…even if it meant becoming farmers. This is the way Groucho Marx described his days on the LaGrange farm…”The first day we got up at 5 in the morning. The second morning we dawdled until 6. By the end of the first week we slept until noon, which gave us just enough time to catch the 1:07 train to Chicago to see the Chicago Cubs play.” They became regulars at Wrigley Field (then known as Cubs park) during the World Series year of 1918. The Marx family moved back to New York in the fall of 1920 and a decade later they moved west to Hollywood.

~Dexter Fowler 1986 (Cubs 2015-2016)
Dexter was acquired before the 2015 season from the Houston Astros in exchange for pitcher Dan Straily and infielder Luis Valbuena, and he paid immediate dividends for his new team. The Cubs put him at the top of their order and started him in centerfield. In that role, he posted a .346 on base percentage, scored over a hundred runs, played a pretty good centerfield, and got clutch hits all season long, including two big home runs in the playoffs (versus Pittsburgh and St. Louis). His 17 homers were a career high, and Fowler had been a regular in the big leagues since 2009. After the season it looked like he would leave via free agency, but the Cubs surprised everyone by signing Dexter late during spring season. He brought out on the practice field in his street clothes to surprise his teammates, and they were overjoyed to welcome him back. Dexter had another great season in 2016, and served as the leadoff man for the World Champion Cubs. He posted a .393 on base percentage, was named to the All Star team, and led off Game 7 of the World Series with a home run.