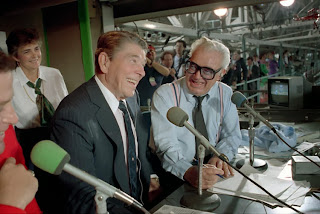 ~Harry Caray 1914–1998 (Cubs announcer 1982-1997)
Harry was more than just the announcer for the Cubs. He was the symbol of the team during his time on the North Side. He had some great moments in the division winning year of 1984, but Cubs fans truly got a taste of what it would be without him when he had a stroke in 1987 and had to miss some time. When Harry Caray finally returned to the broadcast booth in May of 1987, it was a big deal across the country. He had been out of commission for the first month of the year, and WGN’s Superstation trumpeted his return across the nation. It seemed that every baseball fan in America was tuning in that day Harry returned. It also happened to be in an era when the President of the United States was a big Cubs fan, and he even called into the booth to wish Harry well. Most people would have been thrilled, but Harry took the phone call in stride, even when President Reagan said: “I just wanted to welcome you back. The Cubs need you, the baseball world needs you, and the country needs you. You’re great for baseball.” President Reagan went on to talk about Nancy, and Chicago, and his broadcasting days. Harry didn’t really seem to be paying attention to what the President said. Instead, he cut him off by saying “Mr. President, Bob Denier just singled and I’ve got to let you go.” Then he hung up on the President. How many people can say they have done that? Obviously, Ronald Reagan didn’t take it personally. The following season he came to Wrigley Field and did an inning with Harry in the booth. Harry passed away in February of 1998. He was replaced in the Cubs broadcast booth by his grandson Chip.

~Paul Hines 1855–1935 (White Stockings 1875-1877)
Hines played in the very first game the Cubs (then known as the White Stockings) played as a member of the National League. In those days before mitts, when the mound was closer, and the rules hadn’t been quite been nailed down yet, Hines was a centerfielder, first baseman and second baseman. In that first NL season, he led the league in doubles. He left Chicago after the 1877 season and promptly won the triple crown for Providence. Hines played 20 seasons in the big leagues, and is considered one of the best players of his era.

~Adbert Alzolay 1995– (Cubs 2019-present)
The Venezuelan was considered the top pitching prospect in the Cubs system when they brought him up in June. In his first appearance, he was lights out, and people got very excited. He showed glimpses in two of his other three appearances, but in his last start he was rocked hard, which skewed his yearly stats. He finished with an ERA over 7. The Cubs consider him an important piece of the puzzle for the future.

~Trevor Cahill 1988– (Cubs 2015-2016)
The former 18-game-winner with Oakland was down on his luck when the Cubs took a flier on him at the end of the 2015 season. They put Cahill in the bullpen, and he rebounded with a tremendous season. Even during the 2015 playoffs, Trevor was a key contributor out of the pen. The Cubs outbidded Pittsburgh to re-sign him after the season. In 2016, he suffered through injuries and wasn’t able to repeat his 2015 effectiveness.

~Hank Wyse 1918–2000 (Cubs 1942-1947)
They called him Hooks because his best pitch was a devastating curveball. Hank Wyse was an important part of the Cubs starting rotation during the war years. In 1944 he won 16 games for the Cubs. But Wyse had his best season in the Cubs pennant winning year of 1945. He won 22 games, posted a 2.68 ERA, and was named to the All-Star team. His results in the World Series, however, did not quite live up to the rest of his outstanding year. He lost the game he started (Game 2), and relieved in two other losses. For 71 years Hank Wyse was the last Cubs player to throw a pitch in the Fall Classic. He recorded the final Detroit Tigers out in the top of the 9th inning in Game 7 at Wrigley Field. Unlike many war players that never duplicated their success after all the stars returned, Wyse did have one more good year, but in 1947 his famous curveball lost its bite, and Wyse lost his spot in the Cubs rotation.

Hank’s only World Series with the Cubs…

~Bob Usher 1925–2014 (Cubs 1952)
Bob was one of the players acquired in the Smoky Burgess trade in the winter of 1951. He got exactly one plate appearance for the Cubs. On April 26, 1952, he pinch hit for Cubs starter Turk Lown and walked. After that, they shipped him out to the minors. It took Usher five years to return, and when he did, it wasn’t for the Cubs. He probably had the best year of his career for the 1957 Washington Senators.

~Doug Creek 1969– (Cubs 1999)
He had already pitched for the Cardinals and Giants, and was coming off a season in Japan when the Cubs signed him before the 1999 season. He didn’t make the club coming out of spring training, but after a decent half season in Iowa, the Cubs brought him up in June. It didn’t work out. After six appearances and a 10.50 ERA, he was sent back to Iowa. They released him in September of that year. Creek later pitched for the Rays, Mariners, Blue Jays and Tigers until 2005.

~Micah Hoffpauir 1980– (Cubs 2008-2010)
The big first baseman was considered one of those 4A players–too good for AAA, but not quite big league material. He got his longest shot in 2009 with the Cubs and hit 10 homers in only 239 at bats. After he spent the 2010 season mainly in Iowa, Hoffpauir went to Japan.

(The image of Harry Caray and Ronald Reagan is a work of an employee of the Executive Office of the President of the United States, taken or made as part of that person’s official duties. As a work of the U.S. federal government, the image is in the public domain.)