Remember when Rod Beck pitched in 81 Cubs games in one year? 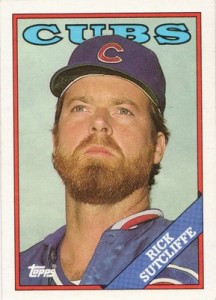 ~Rick Sutcliffe 1952– (Cubs 1984-1991)
The nickname “The Red Baron” was given to Rick Sutcliffe by Harry Caray, because of his intimidating presence (he was 6’7″) and red beard. 82 of his 171 career wins came with the Cubs, including 16 in his Cy Young-winning season of 1984. He was almost unhittable that year as he led the Cubs to the NL East Division Championship. In 150 innings with the Cubs he struck out 155, walked only 39, had a 2.69 ERA, seven complete games and three shut outs. Among his wins: the division clincher, and Game 1 of the NLCS. After his great season in ’84, he struggled through arm problems the next few years before bouncing back from ’87-’89. In ’87 he made the All-Star team, led the league in wins, and finished second in the Cy Young voting. In ’89, he made another All-Star appearance and helped lead the Cubs back to the playoffs. He finished his career with the Orioles and Cardinals, and won 32 more games, but he was doing it on guile alone by then. Among his many accomplishments, the Red Baron holds the record for the most times facing Barry Bonds without letting up a home run. (Photo: 1988 Topps Baseball Card)

~Jackie Collum 1927–2009 (Cubs 1957)
Jackie was part of the worst single inning in Cubs history…an inning in which Cubs pitchers gave up a record 9 walks. He came into the game after Moe Drabowsky walked the first four batters of the inning. Collum walked three more batters, before being relieved by Jim Brosnan, who walked the final two of the inning. Jackie was traded a few months later to the Brooklyn Dodgers for Don Elston: a rare good trade for the Cubs. Elston anchored the Cubs bullpen for the next seven seasons, and Collum only pitched a few more games in the majors after the trade.

~Jeff Baker 1981– (Cubs 2009-2012)
The Cubs got Baker from the Rockies to back up second baseman Mike Fontenot, and he got significant playing time in that capacity his first years with the team. He flirted with the starting job a few times, but never really seemed to claim the position. The Cubs traded him to the Tigers during the 2012 season.

~Donovan Osborne 1969– (Cubs 2002)
The Cubs took a flyer on Osborne after he had major arm problems with the St. Louis Cardinals. The formerly effective starter had gone two full seasons without pitching a ball, and he just didn’t have it anymore. He registered a 6.19 ERA in limited appearances out of the bullpen.

~Matt Kilroy 1866–1940 (Orphans 1898)
Kilroy set a record early in his career that will likely never be broken. He pitched 589 innings in one season for Baltimore. He also won 46 games that year. By the time he came to the Cubs (then known as the Orphans), he had logged 2300 innings in his nine year career. He completed ten of his eleven starts and won 6 games in the last season of his career. His teammates called him Matches. After his playing career he owned a tavern in Philadelphia.