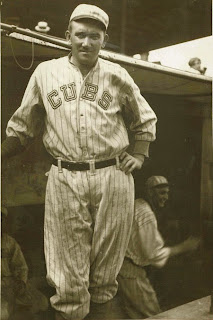 ~Phil Douglas 1890–1952 (Cubs 1915-1919)
They called him “Shufflin’ Phil” Douglas because he sort of shuffled his feet when he walked, but he was one of the best pitchers on the Cubs. Phil was a starter in their 1918 pennant-winning rotation. Unfortunately, Douglas was also a notorious drunk. The Cubs manager at the time was Fred Mitchell, who actually had a soft spot for him. “There’s no harm in the fellow,” he said in 1919, “it’s just that I never knew where the hell he was or if he was fit for work.” His drinking was so bad that the Cubs shipped him off to the New York Giants. There he would disappear for days at a time, and people were constantly sent to his hotel room to wake him or sober him up. Shufflin’ Phil’s story doesn’t end well. After Douglas was caught sending a letter to an ex-teammate (Les Mann) offering to “not show up” in exchange for some money, Commissioner Landis banned him for life. He applied for reinstatement many times, and was turned down every time. Phil Douglas never pitched another game in the big leagues.

~Pete Elko 1918–1993 (Cubs 1943-1944)
Piccolo Pete, as he was known, was a wartime player for the Cubs. Pete backed up Cubs legend Stan Hack at third base two different seasons, and got a grand total of 56 big league plate appearances. Unfortunately for him, he managed only one extra base hit (a double). Piccolo Pete wasn’t quite good enough to make the 1945 pennant-winning roster, and once the veterans all returned from military service, he knew his days in baseball were numbered. He nevertheless plugged away at it in the minor leagues until 1950.

~Zeb Terry 1891–1988 (Cubs 1920-1922)
Zebulon was the starting second baseman for the Cubs for three seasons. He was known as a reliable glove man and got his fair share of clutch hits. Terry averaged more than 50 RBI a season with the Cubs, but he had almost no power. In more than 2600 career plate appearances, he hit only two home runs. After the 1922 season ended, he retired to his native California at the age of 31.