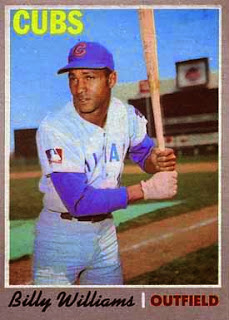 ~Billy Williams 1938– (Cubs 1959-1974)
Billy Williams got his nickname (“Sweet Swingin’ Billy from Whistler”) because of his nearly perfect swing and his hometown: Whistler, Alabama. He played for the Cubs from 1959-1974 and is simply one of the greatest players to ever wear a Cubs uniform. Sweet Swingin’ Billy was a six-time All-Star (and hit a homer in the ’64 game), a batting champion, was named the MLB player of the year, finished second in the MVP balloting in two different years, hit more than 400 career home runs, and was inducted into baseball’s Hall of Fame in 1987. Ernie Banks may have been Mr. Cub, but during the years he shared the field with Billy Williams, he may have only been the second best player on the team. Billy Williams manned left field for the Cubs for twelve years (other than a few years in the mid-60s when they switched him over to right). Near the end of the 1973 season, however, manager Whitey Lockman had the brilliant idea of moving the life-long outfielder to first base. After setting a NL record for most consecutive games played (1117), and establishing a reputation as an iron man outfielder, it only took a few games at first base for Billy to get spiked. He missed twice as many games in 1974 as he missed the previous twelve seasons combined. He finished his career with the Oakland A’s, where Billy finally got a chance to play in the postseason. (Photo: Toppps 1970 Baseball Card)

~Champ Summers 1946 –2012 (Cubs 1975-1976)
Summers received his nickname “Champ” from his father: “Dad took one look at me when I was born and said, He looks like he’s just gone 10 rounds with Joe Louis.’” His real name was John Junior Summers, and he played two of his eleven major league seasons with the Cubs. He didn’t make it to the majors until he was 28 because he had served in Vietnam. Champ was a backup corner outfielder and first baseman with no power and a batting average in the low .200s with the Cubs, but he later had a couple of good seasons for the Detroit Tigers (hitting 20 and 17 home runs). The last at-bat of his career was in the World Series with the San Diego Padres, who had just knocked the 1984 Chicago Cubs out of the playoffs.

~Dusty Baker 1949-– (Cubs manager 2003-2006)
His managing stint with the Cubs began in a promising fashion. He led the team to their first playoff appearance in five years, and then led them to their first playoff series win in 95 years. But he will forever be associated with their epic collapse in the 2003 NLCS. His critics claimed he should have gone out to calm down Mark Prior, who completely fell apart after the Bartman incident and ensuing error by Alex Gonzalez. Dusty was also blamed by many fans for overusing Prior and Wood, which they felt led to the two pitchers developing arm problems. By the time 2006 rolled along, Baker was incredibly unpopular in Chicago. After he was fired, Baker claimed that a fan somehow got into the dugout overnight and left an excrement deposit on the dugout step Dusty liked to occupy.

~Charlie Dexter 1876–1934 (Orphans 1900-1902)
Charlie played three seasons in Chicago as a catcher/infielder/outfielder. He played everywhere on the field for the Cubs (then known as the Orphans) except shortstop and pitcher. His best season was 1901 when he drove in 66 runs and stole 22 bases. His average dropped to .227 the following year, however, and the Cubs cut him loose. In 1903 Charlie was at the Iroquois Theater in Chicago when a fire broke out. That fire killed over 600 people, but not Charlie. He and another former Cub John Houseman were credited with kicking down a door and saving a number of people that horrible day.

~Babe Dahlgren 1912–1996 (Cubs 1941-1942)
This Babe will always be remembered as the player who took Lou Gehrig’s place when the Iron Man’s long streak finally ended in 1939. In 1941, rumors made their way around the league that Dahlgren had smoked marijuana. He demanded a drug test, and became the first big league player to have one. (He was clean.) The Cubs picked up the ex-Yankee during the 1941 season and he had an immediate impact, slugging 16 homers and driving in 59 runs the rest of the season. When the Cubs got wind that Babe was going to be drafted the following year, they sold him to the Browns. Dahlgren never did have to serve in the military and wound up becoming an All-Star with the Philadelphia Phillies. 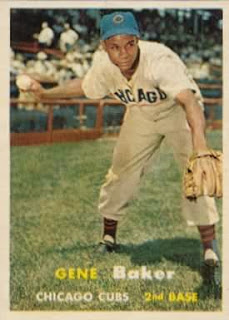 ~Gene Baker 1925–1999 (Cubs 1953-1957)
After Jackie Robinson finally broke the color barrier in 1947, Cubs owner Phillip Wrigley still didn’t sign a black player for several more years. Wrigley was afraid of signing black players because his fan base was almost totally white and he worried how they would react. It wasn’t until the end of the 1953 season that Gene Baker was finally called up. He was 28 years old and had hit well in the minor leagues, but the Cubs hadn’t called him up earlier despite having no one better on the major league roster. They were 40 games out of first place. Ernie Banks was signed shortly thereafter from the Kansas City Monarchs. They signed Ernie strictly because they needed another black player to room with Baker. If they didn’t have Baker, they wouldn’t have signed Banks. Banks just happened to play in a game first and is therefore remembered as the first black player in Cubs history, but Baker was also on the roster at the same time. His best season with the Cubs was in 1955, when he was named to the All-Star team. Baker was later traded to the Pirates and won a World Series ring with them in 1960. Gene later broke a few color barriers with Pittsburgh. He became the first black manager in organized baseball in 1961 (Batavia Pirates), and the first black coach in 1962 (Triple A). He finished his baseball career as a scout.