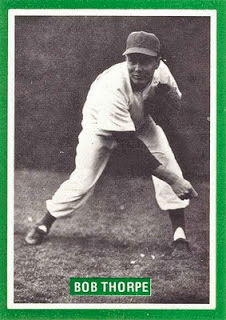 ~Bob Thorpe 1935–1960 (Cubs 1955)
Thorpe was a minor league phenom, winning 28 games in the lower minors in 1954. The Cubs brought him all the way up the big leagues the following season, and he pitched in a few games out of the bullpen at the beginning of 1955. He wore the now retired #26 (Billy Williams), before being relegated back down to the minors. Thorpe blew out his arm, and never returned to the big leagues. He retired from baseball in 1959, and took a job as an apprentice electrician. Thorpe was accidentally electrocuted a short time later, and died at the age of 24. (Fritsch Baseball Card, One Year Winners, 1977)

~Damon Buford 1970– (Cubs 2000-2001)
The son of Orioles great Don Buford played nine seasons in the big leagues, including the last two of his career with the Cubs. In 2000 he got the most extended shot of playing time in his entire career. In over 550 plate appearances, he batted .251 with 15 homers. After a tough start in 2001, the Cubs released him in May. He never played in the big leagues again.

~Jack Cusick 1928–1989 (Cubs 1951)
Cusick made it up to the big leagues with the Cubs in 1951 at the age of 23. The shortstop backed up Roy Smalley, but his batting average was about the same as his weight (.177), and he didn’t last long. After the season the Cubs traded Jack to the Boston Braves for outfielder Bob Addis. Cusick played one more season with the Braves. When no one offered him a big league job after the 1952 season, Cusick retired at the age of 24.

~Otto Knabe 1884–1961 (Cubs 1916)
The incredibly German-sounding Otto Knabe was, of course, nicknamed Dutch. (That was common in those days — Dutch was an Americanized version of “Deutsch”). He had a very good eleven-year big league career mostly as a second baseman. Dutch was renowned for his ability to handle the bat. He led the league in sacrifice hits four different times. By the time he joined the Cubs for their first season in Wrigley Field in 1916, he was coming off a stint as a player/manager in the Federal League. The Cubs traded the last link to their championship teams — Frank Schulte — to the Pirates to acquire Otto, and used him as a utility man. He saw time at 2B, SS, 3B, and RF, and retired from baseball after the season.

~John Stedronsky 1850–1924 (White Stockings 1879)
Stedronsky was an unlikely big league ballplayer. He was born in Czechoslovakia, and didn’t pick up baseball until later in life. John was a 29-year-old rookie third baseman who got into the last four games of the 1879 season. He got exactly one hit, which in fairness to Stedronsky is one more big league hit than you or I ever tallied.