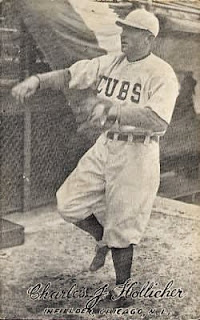 ~Charlie Hollocher 1896–1940 (Cubs 1918-1924)
Charlie’s life was a series of very high highs and very low lows. He was one of the greatest hitters on the Cubs in his seven seasons in the big leagues. He led the 1918 team to the pennant, and led the league in hits. In 1922, he only struck out four times in 509 at-bats, still the best ratio in Cubs history. In two different seasons he was in the top ten in hitting, and he anchored the team’s defense at shortstop. He seemed destined to have a Hall of Fame career. But Charlie was a very troubled man. In 1923 he developed a strange stomach problem. In August of that season, he left a note for his manager one day, saying he was going to quit for the year. He was convinced that baseball was making him sick. This is what his letter said, according John Snyder’s Cubs Journal: “Feeling pretty rotten so made up my mind to go home and take a rest and forget baseball for the rest of the year. No hard feelings, just don’t feel like baseball for the rest of the year.” He wrote that note on the day President Warren Harding died, so it didn’t get much attention in the Chicago press. The Cubs simply described his problem as “nervousness,” and vowed he would return the following season. It seemed like everything was fine when he came back the next year, but he couldn’t shake the stomach problems. He saw dozens of doctors and specialists, but no one could figure out what he had. After the 1924 season, at the ridiculously young age of 28, he retired…with a lifetime average of .304. When his playing days were over, he dropped out of public view and drifted from job to job, but Hollocher continued to suffer mightily, both physically and mentally, most likely from clinical depression. His return to baseball was rumored nearly every year, but the demons that ended his playing career eventually ended his life. In 1940, at the age of 44, he bought a shotgun and shot himself.

~Roger Bresnahan 1879–1944 (Cubs 1913-1915)
Roger Bresnahan was a proud Irishman. So proud, in fact, that he told everyone that he was actually born in the Irish city of Tralee. That led to the nickname, the Duke of Tralee. Turns out, he wasn’t from Ireland at all. He was born and raised in Toledo, Ohio. But Bresnahan was one of the all-time great catchers. He was Christy Mathewson’s catcher with the New York Giants, and was involved in that infamous Merkle Boner game in 1908. It wasn’t until his last three years in the big leagues that he came to Chicago. He wasn’t the same player by then, but was still revered for his smarts and moxie. So much so, the Cubs eventually hired him to manage the team. He was their player/manager for the 1915 season and led them to a fourth place finish. That was the final season in West Side Grounds. The next year the Cubs moved into what is now known as Wrigley Field. He was inducted into the Hall of Fame in 1945, just a few months after his death.

~Jimmy Stewart 1939–2012 (Cubs 1963-1967)
Not to be confused with the movie star of the same name, this Jimmy Stewart was a utility man who played every position for the Cubs except first base, catcher, and pitcher. His biggest shot came in 1964, when he played a lot of second base after the shocking death of Ken Hubbs, and hit .253 in over 400 plate appearances. Unfortunately for him, he slumped badly the following year, and was used less and less by new manager Leo Durocher. Stewart later played for the White Sox, Reds, and Astros.

~Claud Derrick 1886–1974 (Cubs 1914)
Deek, as he was known by his teammates, was a utility infielder for most of his big league career. His final season in the majors was with the Cubs. He hit .219. Deek played in the minors for another seven seasons before hanging up his spikes at the age of 35.

~Jason Waddell 1981– (Cubs 2009)
After languishing for eight seasons in the San Francisco minor league system, Waddell finally got his shot at the big leagues with the Cubs in 2009 at the age of 28. He appeared in a grand total of three games, and registered a 5.40 ERA in 1.2 innings before being sent back down to the minors. 2011 was his last season in organized baseball. 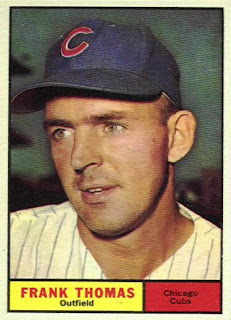 ~Frank Thomas 1929– (Cubs 1960-1961, 1966)
Not to be confused with the Big Hurt, the White Sox Hall of Famer, this Frank Thomas was a third baseman, first baseman, and outfielder. He also had a memorable nickname. His teammates called him The Big Donkey. Frank was a three-time All-Star with the Pirates in the 50s before joining the Cubs. He hit 21 homers in his one full season in Chicago, but the team had a few superstars and budding superstars at his best positions (Santo, Banks, and Williams), so they traded him to the Braves for Mel Roach in early 1961. Thomas later returned to finish his career with the Cubs in 1966. His final stint with the team lasted only a few weeks. When he was released on June 4, 1966, his big league career was over. He hit 286 career home runs. (Photo: Topps 1961 Baseball Card)