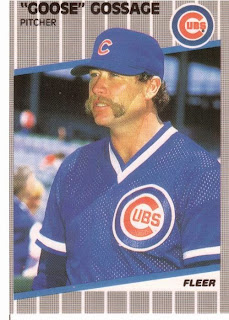 ~Goose Gossage 1951– (Cubs 1988)
He was so universally referred to by his nickname when he arrived in Chicago in 1988, even the baseball card makers (Fleer) didn’t bother using his real first name anymore. (It was Rich.) Unfortunately for the Cubs, Rich got richer pitching for the Cubs only after his best days were behind him. He was signed to be the closer, but didn’t quite have the stuff needed for the role. He managed only 13 saves (including the 300th of his career) in what turned out to be his last season as a full-time closer. The Cubs released him before the 1989 season. In 2008, Goose Gossage was inducted into baseball’s Hall of Fame. (Photo: 1989 Fleer Baseball Card)

~Bo Porter 1972– (Cubs 1999)
Porter was mainly a minor league outfielder, but he did get a few cups of coffee in the big leagues, including 1999 with the Cubs. He got only 25 plate appearances and hit .192. He later got similar tastes with Texas and Oakland. After his playing career he went into coaching. For two seasons he managed the Houston Astros, and has also been on the big league coaching staffs for the Marlins, Diamondbacks, Nationals, and Braves.

~Tim Worrell 1967– (Cubs 2000)
Worrell had a very productive 14-year big league career that featured a few very good seasons. He appeared in 678 games for the Padres, Tigers, Indians, A’s, Orioles, Giants, Phillies, Diamondbacks, and Cubs. He won three and saved three games for the Cubs during his half-season in Chicago. After the season the Cubs traded him to the Giants for Bill Mueller. Tim’s brother Todd was also a big leaguer.

~Dave Lemonds 1949– (Cubs 1969)
Lemonds was the first overall pick of the 1968 Amateur draft by the Cubs, a left-handed pitching star from the University of North Carolina (ahead of fellow first round picks Bart Johnson and Steve Garvey). He came up briefly in 1969 with the Cubs, but during their pennant chase wasn’t considered reliable enough for manager Leo Durocher. He started one game in June and was quickly sent back down to the minors. Lemonds never made it back to the big leagues for the Cubs. He later got a cup of coffee with the 1972 White Sox.

~Buck Freeman 1896–1953 (Cubs 1921-1922)
Freeman was part of the starting rotation of the Cubs in 1921 as a rookie, alongside the likes of Hall of Famer Grover Cleveland Alexander. Buck didn’t impress. He won 9 games, but he only struck out 42 batters in 177 innings. He got one more shot the following year and was hit hard. That was the end of his big league career.

~Ward Miller 1884–1958 (Cubs 1912-1913)
Miller had not one, but two great nicknames. He was called “Windy” and “Grump” by his teammates. Grump was a fourth outfielder for the Cubs, backing up Frank Schulte, Tommy Leach, and Jimmy Sheckard. He hit over .300 in his first season with the Cubs, but slumped to .236 the following year. After the 1913 season, he jumped to the Federal League. 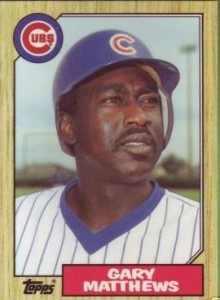 ~Gary Matthews 1950– (Cubs 1984-1987)
Gary Matthews earned the nickname Sarge for his dugout leadership, take-charge attitude, and competitive playing. He embraced the name, and beginning early in the ’84 season, he would salute the legions of LF bleacher fans who would cheer his every appearance in the outfield. He was one of the most important players on the 1984 Cubs team that came within a few outs of the World Series. Sarge’s on-base percentage was over .400, he hit 14 homers and stole 17 bases, and though he wasn’t the fielder he was earlier in his career (with the Giants and Phillies), he played with toughness and grit. He played several seasons for the Cubs in the 1980s, but really only had one more good year (1986). He was getting up in age by that time. He later coached for the Cubs, and his son Gary Matthews Jr. began his major league career with the Cubs too. (Photo: Topps 1987 Baseball Card)