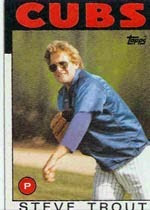 ~Steve Trout 1957– (Cubs 1983-1987)
Steve Trout was nicknamed Rainbow by his high school teammates for obvious reasons…the Rainbow Trout. He was a flaky lefty who probably would have been nicknamed Dizzy if not for his father who already laid claim to the nickname. (Dizzy Trout pitched for the Detroit Tigers and actually beat the Cubs in the 1945 World Series.) Steve displayed a little “dizziness” of his own when he pitched for the Cubs, developing a reputation for his offbeat personality. Rainbow never quite lived up to the status of his 2-time All-Star father, but he had a very respectable career, and was a big part of the 1984 Division champion Cubs team. The fan favorite went 13-7 in 1984 and won his LCS start against San Diego. The Cubs rewarded him with a big salary, but he developed elbow troubles over the next few seasons. When he showed signs he was returning to form in 1987, Trout was dealt to the Yankees. He also later pitched for the Seattle Mariners. His record with the Cubs was 43-28. (Photo: Topps 1986 Baseball Card)

~Scott Fletcher 1958– (Cubs 1981-1982)
Fletcher was actually traded for his fellow birthday boy Steve Trout. He was just a young prospect with the Cubs who never would have gotten much playing time (a youngster named Ryne Sandberg was rated slightly higher), but Fletcher blossomed with the White Sox. He shared the second base job on their 1983 playoff team, and went on to have a very respectable 15-year big league career with the White Sox, Rangers, Brewers, Red Sox, and Tigers. He was also part of the trade that brought Sammy Sosa from Texas to the White Sox.

~Oswaldo Mairena 1975– (Cubs 2000)
The Nicaraguan lefty pitched in two games for the Cubs in September of 2000. He was hit very hard, giving up seven hits (including a homer) and walking two in only two innings pitched. He later had a similarly brief cup of coffee with the Marlins in 2002. He later pitched in the Mexican League.

~Calvin Murray 1971– (Cubs 2004)
Calvin was an outfielder who played for the Giants and Rangers before coming to the Cubs for the last gasp of his big league career. He appeared in only eleven games, mostly as a late inning defensive replacement. He was a great fielding center fielder (leading the league in range in 2001), but his lifetime batting average was only .231.

~Todd Haney 1965– (Cubs 1994-1996)
Haney was a backup infielder for the Cubs in the mid-90s, mostly backing up Ryne Sandberg and Steve Buechele. He was one of three Todds on the 1995 Cubs, along with Todd Pratt and Todd Zeile, one of the most Todd-heavy teams in Cubs history.

~Bill Moisan 1925–2010 (Cubs 1953)
Moisan’s Cubs career lasted exactly eight days. He made three appearances between September 17 and September 25, 1953. Even though he only pitched five innings and had a 5.40 ERA, it was the pinnacle of his long hard struggle. Moisan pitched ten long seasons in the minors. His roommate in the minors was future TV/movie star Chuck Connors.

~Bill Merritt 1870–1937 (Colts 1891)
Merritt began his career with the Cubs (then known as the Colts), and though he didn’t get much playing time (11 games), the catcher/first baseman eventually played eight seasons in the big leagues with other teams, including Boston, Pittsburgh, and Cincinnati.

~Tod Brynan 1863–1925 (White Stockings 1888)
Brynan pitched for the Cubs (then known as the White Stockings) as the fifth or six starter (on a fill-in basis) during the 1888 season for manager Cap Anson. He won two games. He later had a very brief (and incredibly unsuccessful) stint with Boston. 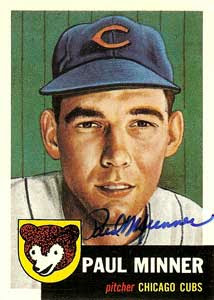 ~Paul Minner 1923–2006 (1951-1957)
The big 6’4″ pitcher was nicknamed Lefty, and he pitched for the Cubs for seven seasons. Just like every ballplayer named Lefty, Minner was a left-handed pitcher. He was big and strong, and had a couple of very respectable years for the Cubs, including 1952 when he was 14-9. It’s true he was 17 games under .500 in his other six years, but those were some unbelievably lousy teams. His ERA was always respectable. (Photo: 1953 Topps Baseball Card)