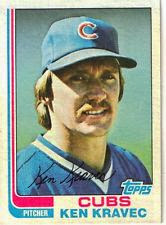 ~Ken Kravec 1951– (Cubs 1981-1982)
Kravec had been a 15-game winner for the White Sox just a few years before he was acquired by the Cubs in a rare crosstown trade (for Dennis Lamp). This one worked out for the Cubs, but not in the way you might expect. Kravec was terrible as a Cubs pitcher, going 2-7 in two full seasons, with an ERA over five. However, after his playing career ended, Ken went to work for the Cubs as a scout. He’s been a valuable member of their front office staff. (Photo: 1982 Topps Baseball Card)

~Earl Moore 1877–1961 (Cubs 1913)
His Cubs career wasn’t anything special, but his nickname might have been the best ever. They called him “Steam Engine in Boots”. Moore was as cocky as they came — at the time many people believed that he came up with the nickname himself. Even if he didn’t, he certainly embraced it. “Moore carries the title of ‘Steam Engine in Boots,’” noted the Washington Post, “and after his name in the hotel registers always appears the letters ‘S.E.I.B.’” S.E.I.B was a two-time twenty-game winner, and had 150 career wins under his belt by the time he came to Chicago in 1913, but he was also near the end of his career. He pitched in 7 games with the Cubs, won 1, and had a 4.45 ERA. The following year, he switched over to the Federal League for his final season of baseball. He died in 1961 at the age of 84.

~Roy Henshaw 1911–1993 (Cubs 1933-1936)
Roy Henshaw was not a big man. The University of Chicago product was no taller than 5’8” and didn’t weigh a pound over 155. But he was also one of the best starting pitchers on the 1935 Cubs team that would win the National League pennant before losing to the Detroit Tigers in the World Series. Henshaw had a sterling 13-5 record, and for one glorious day — June 28, 1935 — he thought he was perfect. He didn’t get flustered in the 6th inning when Pirates pitcher Mace Brown hit a ball that Cubs center fielder Freddie Lindstrom camped under, had two hands on, and dropped. Everyone in the crowd and both dugouts assumed the play had been ruled an error. They had no way of knowing, because in those days the scoreboard didn’t record that information (scoring decisions or the number of hits allowed), and the public address announcer was still using a giant megaphone, and that was only used to announce who was batting or who was pitching. So when the game ended, everyone thought Henshaw had thrown a no-hitter. The crowd erupted and the players swarmed their hero on the mound. It wasn’t until after the game, in the clubhouse, that they discovered the sad news. The ball hit by the Pittsburgh pitcher had been ruled a hit. Henshaw had only thrown a one-hitter. But it was still the best game of his career.

~Luther Roy 1902–1963 (Cubs 1927)
Roy was a reliever for the 1927 Cubs, and pitched pretty well in his limited appearances with the club. He also pitched for the Indians, Phillies, and Dodgers in his four-year big league career.

~Frank Martin 1878–1942 (Orphans 1898)
Martin played in exactly one game for Chicago. He started at second base, batted four times, and struck out three times. That may be why he never played in another game for the Cubs (then known as the Orphans). He also played briefly for Louisville and the New York Giants.

~Sam Dungan 1866–1939 (Orphans/Colts 1892-1894, 1900)
Dungan was an outfielder/first baseman who got quite a bit of playing time in Chicago during his three years in a Cubs (then known as the Colts and Orphans) uniform. He was known as one of the toughest men in the league to strike out. He finished in the top ten in that category in three different seasons. His lifetime batting average was over .300.

~Eric Jokisch 1989– (Cubs 2014)
Eric threw a no-hitter for the Cubs in the minor leagues in 2013, so expectations were high when Jokisch was called up to the Cubs in September of 2014. He pitched well in limited action, appearing in four games, including one start, and posting a 1.88 ERA. The Northwestern product never made it up to the big leagues again. He bounced around the minors for the A’s, Rangers, and Marlins, before signing a contract to pitch in Korea.