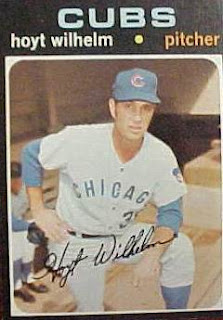 ~Hoyt Wilhelm 1923–2002 (Cubs 1970)
The future Hall of Famer was 47 years old when the Cubs got him in 1970. He will be remembered for his great knuckleball, and his outstanding career as a reliever. When he retired he held the record for most games and wins in relief, and was the first relief pitcher to be named to the Hall of Fame. He won’t, however, be remembered for his days with the Cubs. He pitched in three games, amassed a very impressive ERA of 9.82, and was traded after the season to the Braves. He is still the oldest player ever to play for the Cubs. Here’s a little bit of trivia about Hoyt: He hit a home run in his first major league at-bat, and never hit another one in 21 major league seasons. (Photo: Topps 1971 Baseball Card)

~Alex Burnett 1987– (Cubs 2013)
Burnett appeared in exactly one game for the Cubs on May 29, 2013. He pitched the ninth inning against the White Sox at Wrigley Field that day, and allowed only one hit, a single by Jeff Keppinger. The Cubs won the game 9-3. Burnett previously pitched for the Twins and Orioles.

~Lou Jackson 1935–1969 (Cubs 1958-1959)
The Grambling product was a backup outfielder for the Cubs during two brief cups of coffee in the late 50s. He hit his only big league homer in a Cubs uniform. He later got one more brief taste of the big leagues with the 1964 Baltimore Orioles. Jackson went to Japan after his stint in Baltimore and had some success there, but one day when he was batting, he collapsed at the plate. He died the following year of pancreatitis, at the age of 33.

~Phil Powers 1854–1914 (White Stockings 1878)
Powers had one of the great nicknames in Cubs history. They called him Grandmother. He played for the Cubs (then known as the White Stockings) as a rookie in 1878. That was only the third season in National League history. Powers didn’t do much for Chicago, hitting only .161 in 32 plate appearances. The catcher played another six seasons in the big leagues after that, but never did quite master the art of hitting. His lifetime batting average was .180.

~Brandon Morrow 1984– (Cubs 2018-present)
The Cubs signed the accomplished reliever and turned him into something he had never been in his career — a full-time closer. Brandon was lights out in that role, saving 22 games and posting a 1.47 ERA before getting hurt. His absence at the end of the season was a major contributor to the Cubs early playoff exit.