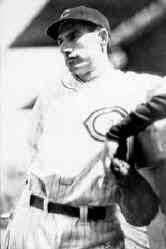 ~Footsie Blair 1900–1982 (Cubs 1929-1931)
His real name was Clarence Vick Blair, and he was primarily a backup second baseman (he also backed up 1B and 3B) with the Cubs from 1929-1931. In 1930, he became the regular second baseman after Rogers Hornsby broke his ankle. That 1930 team had five future Hall of Famers on the roster, but choked away the pennant in the closing weeks of the season. Clarence played his entire major league career with the Cubs (only three seasons), and he wasn’t a great player, but he’ll always be remembered for his great nickname. His teammates dubbed him Footsie because he was the only soccer star to make the majors, and he pioneered the “intentional boot” play, where he kicked grounders to proper base.

~DJ LeMahieu 1988– (Cubs 2011)
DJ was one of several LSU infielders to play for the Cubs. He was a highly rated prospect (2nd round draft choice), but didn’t play much for the Cubs. They included him in the trade for Rockies third baseman Ian Stewart; a bad trade in retrospect. LeMahieu became their everyday second baseman; a .300 hitter and a Gold Glover. Stewart didn’t work out in Chicago and was gone the following year.

~Jack Aker 1940– (Cubs 1972-1973)
Jack was known as “Chief” and had a very solid 11-year big league career, including two with the Cubs. He was acquired from the Yankees for disappointing aging outfielder Johnny Callison. The right-handed reliever saved 29 games for the Cubs over his two years in Chicago and was released after the 1973 season. He finished his career with 129 saves. He is mentioned in Jim Bouton’s classic book Ball Four because he was the player rep for the Seattle Pilots when Bouton pitched there.

~Gene Packard 1887–1959 (Cubs 1916-1917)
Packard was an important part of the pitching staff in the Cubs’ first season at Wrigley Field. He won ten games as a combination starter/reliever, including a one-hitter against the Braves. The following year he was sold to the Cardinals. He also pitched for the Phillies and Reds. In the minor leagues, Packard threw a perfect game.

~John O’Brien 1866–1913 (Colts 1893)
The Canadian-born second baseman had one of the great nicknames on the Cubs (then known as the Colts). He was known as “Chewing Gum.” Unfortunately for Chewing Gum, he played during the years before chewing gum magnate William Wrigley bought the team. O’Brien’s entire Colts career lasted four days. He also played for the Pirates, Orioles, and Louisville, all before the turn of the century.

~George Bradley 1852–1931 (White Stockings 1877)
One of the Chicago players who was named after a president (George Washington), Bradley pitched for the Cubs (then known as the White Stockings) in their second National League season. His most memorable game was in June, when Al Spalding got hit in the torso in the first inning with a liner (off the bat of a former teammate Bob Addy) and had to be replaced. Bradley came in for the star pitcher and won the game. That season Bradley won 18 games…but he also lost 23, and led the league in earned runs allowed. His nickname was Grin. Before coming to the Cubs he pitched the first no-hitter in big league history when he was with St. Louis. 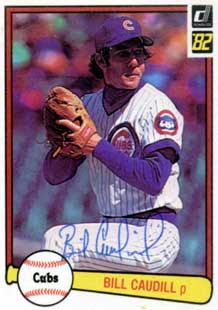 ~Bill Caudill 1956– (Cubs 1979-1981)
The Cubs were mesmerized by Bill Caudill’s strikeout potential. He came up through the system as a starting pitcher and never seemed able to put it all together. In his rookie season of 1979 he won only one of his twelve starts. It wasn’t until they moved him into the bullpen that they saw a glimmer of what he could be. He had a great 1980 setting up for Bruce Sutter (2.19 ERA), but the following year they moved him back into the starting rotation. It was a disaster. Needless to say, the Cubs gave up on him. They dumped him off in a trade for Pat Tabler. Another very bad trade for the Cubs. Tabler didn’t do much of anything in his time in Chicago, but Bill Caudill became an All-Star closer in the American League. The Seattle Mariners wisely put him back in the bullpen, and he saved over 100 games the next four seasons.(Photo: 1982 Donruss Baseball Card)