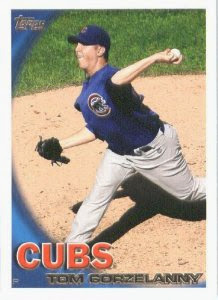 ~Tom Gorzelanny 1982– (Cubs 2009-2010)
The homegrown pitcher (Marist High School) was acquired by the Cubs in the summer of 2009 when their starting rotation suffered a few injuries. He had pitched for the Pirates the previous 4 1/2 seasons, and had been a bit of a Cubs-killer. When he put on the Cubs uniform he had a few good outings, but never approached the success he had with Pittsburgh. The Cubs traded him to the Washington Nationals after the 2010 season. (Photo: 2010 Topps Baseball Card)

~Jack Warner 1940– (Cubs 1962-1965)
No relation to the Jack Warner who founded Warner Brothers, this Jack Warner was a right-handed reliever for the Cubs in parts of four different seasons in the 1960s. He never appeared in more than 11 games (1965), and had limited success. His lifetime ERA in the big leagues (all with the Cubs) was 5.10. He had exactly one career hit as a batter, and it came against former Cubs teammate Don Cardwell.

~Al Glossop 1914–1991 (Cubs 1946)
Al was a backup infielder for the Phillies, Dodgers, Giants, and Boston before coming to the Cubs in 1946. He got his only shot at starting in the big leagues during the war year of 1942. Unfortunately for Glossup, he hit only .225 for the Phillies that year and never got another chance. He was drafted into the Navy after that year and spent 1944 and 1945 in the Pacific. His stint with the Cubs in 1946 was his final gasp in the big leagues. In fourteen plate appearances as a Cub, he didn’t get a single hit.

~Hank Schreiber 1891-1968 (Cubs 1926)
Hank had one of the oddest careers in MLB history. He played for five teams in the big leagues — each of them for one season — but none of them in consecutive seasons. He played for the White Sox, Braves, Reds, and Giants before coming to the Cubs for his last taste of the big-time. Hank played in ten games for the 1926 Cubs as a backup 2B/SS/3B. He was 34 years old at the time.