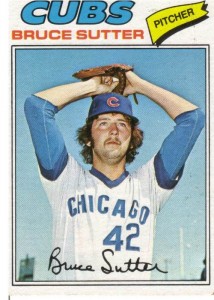 ~Bruce Sutter 1953 (Cubs 1976-1980)
Bruce Sutter is a Hall of Famer, but of course, he’s not wearing a Cubs hat even though he had his best and most dominating seasons on the North Side of Chicago. He was a six-time All-Star including four times with the Cubs. He won the Cy Young Award in 1979 for a very mediocre Cubs team. He led the league in saves 5 times. And he won the World Series with the 1982 St. Louis Cardinals. Bruce Sutter was inducted into the Hall of Fame in 2006; his 13th season on the ballot. (Photo: Topps 1977 Baseball Card)

~Marv Rickert 1926 (Cubs 1942-1947)
His teammates called him “Twitch”. He began his career with the Cubs, served in the Coast Guard during the war for three years, and then came back to play two more seasons in Chicago. He later played with the Reds, Braves (including in the World Series), Pirates, and White Sox. Twitch had two memorable Cubs moments, one good and one not so good. In spring training in 1946, he tried to steal second base…with the bases loaded. He attoned for that miscue later that year when he and Eddie Waitkus hit back-to-back inside-the-park home runs.

~James Russell 1986 (Cubs 2010-2014, 2015)
A key left-handed arm out of the Cubs bullpen for several seasons, and son of former big league closer Jeff Russell. He was traded to Atlanta in 2014, but it didn’t work out for him there. The Cubs reacquired him after he was released by the Braves in 2015, but he didn’t pitch well. The situational lefty did appear in 49 games, but his ERA of 5.49 was ugly. After the season he was signed as a free agent by the Phillies.