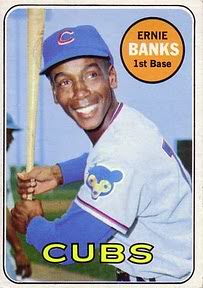 ~Ernie Banks 1931 (Cubs 1953-1971)
Ernie is not only a Hall of Famer, he’s the first African American player to ever play for the Chicago Cubs. The way he became a Cub is almost a fluke. At the end of the 1953 season, Gene Baker was called up to be the first African-American Cubs player. Ernie was signed shortly thereafter from the Kansas City Monarchs. They signed Ernie strictly because they needed another black player to room with Baker. If they didn’t have Baker, they wouldn’t have signed Banks. They honestly had no idea what they were getting in Banks, either. One of the Cubs coaches, Ray Blades, gave Ernie a book called “How to play baseball” even though he had hit .380 for the Monarchs. Banks only got in the lineup first because Baker was hurt (he got into a game three days later). At the time, inserting Banks into the lineup was a very controversial move, because shortstop was considered a “thinking man’s” position, and Banks was the first African-American in Major League history to play shortstop on a regular basis. Needless to say, it worked out just fine. Why do they call Ernie Banks Mr. Cub? Ernie is among the top 5 all-time Cubs in games played (1st), at bats (1st), hits (2nd), runs (5th), doubles (3rd), home runs (2nd), and RBI (2nd). Unfortunately he also played in more losses than any other player in baseball history. In a little known bit of trivia, he also was the first African-American manager. When manager Whitey Lockman was kicked out of a game on May 8, 1973, Ernie was the acting manager for one inning. Frank Robinson became the first full-time African American manager just a few months later. Banks was elected to the Hall of Fame in 1977, and in 2008 Ernie became a part of Wrigley Field when the club unveiled his statue. It stands right in front of the main gate at Addison and Clark. Countless Cub fans take pictures in front of it every year. (Photo: Topps 1969 baseball card)
AUDIO: Ernie at the Hall of Fame…

A collection of our Ernie Banks videos (and audio) can also be found here. RIP, Mr. Cub.

Our tribute shirt to four beloved greats from Cubs lore. All are missed tremendously. A portion of the proceeds from every shirt will be donated to Cubs Charities in honor of Ernie, Ronnie, Jack, and Harry. Click here. 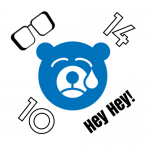 ~Tommy La Stella 1989 (Cubs 2015-present)
The Cubs front office really saw something in La Stella because they traded one of their prized pitching prospects (Viscaino) to the Braves to acquire him. La Stella was given the second base job on Opening Day, but was injured and missed most of the season. When he returned to action, he became a valuable bat and reliable glove off the bench. He served in that role for most of the 2016 season as well, but when the Cubs faced a roster crunch, they sent Tommy to the minors. He did not respond well. For several weeks he refused to report to Iowa. He eventually did come back, and made it back up to the big leagues to help the Cubs down the stretch.

~Bob Ferguson 1845 (White Stockings 1878)
He was the player/manager for one season, and was known for his ferocious temper. Ferguson hit .351 as a player, but was fired because owner Al Spalding considered him tactless and brutish. He also had one of the greatest nicknames of all time: “Death To Flying Things”

~Ray Brown 1889 (Cubs 1909)
He was only 20 years old when he got his cup of coffee with the Cubs, the tenth youngest player in league history at that point. He pitched exactly one game, on September 29, 1909 against the Phillies at West Side Grounds. Brown threw a five hit complete game victory, but somehow never pitched in the big leagues again. After a few more seasons in the minors, he hung up his spikes at the tender age of 24.